Japan recorded their first ever win against a top five team with a 12-10 win against Australia on the Gold Coast today (Tuesday), frustrating their hosts with inspirational display. 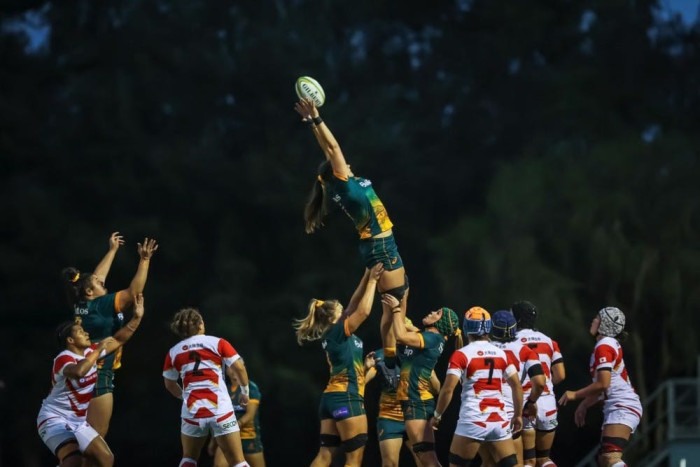 Japan began the game with a world ranking of 12, against the Wallaroos’ 5. But with good wins against Fiji and an Australian Barbarians XV a close game was expected – and certainly much closer that when the two teams last met in 2019, when Australia had run out winners of a two test series 34-5 and 46-3.

From the start pressure applied by the rushing Japanese defence rattled the Australians, either into a mistimed pass, an inferior position behind the advantage line or into a vulnerable position for hungry ruck workers to attack the ball.

Under pressure the Australians fell victims to impatience as they pushed passes and rushed their plays - the antithesis of the mood they needed to harness against the busy, swarming line of Japanese defenders. They had a size advantage but rarely used it but for No.8 Grace Hamilton making several strong charges in that period.

There was far too little of that direct play when prop Eva Karpani needed to be unleashed more.

Instead, the Wallaroos were mesmerised by the few inroads they made out wide and kept flinging the ball hopefully without first earning the right by punching runners hard at the line up the middle.

Outside centre Georgie Friedrichs and winger Mahalia Murphy made incisive runs with speed and confidence but were turned into nothing more.

Another strong Murphy run approaching half-time was squandered by impatience. Instead, of a calm play with quick ruck ball when she was halted, a pass flung at Ivania Wong was intercepted and booted downfield.

If not for an incredible chase by lanky Wallaroos lock Kaitlan Leaney, it would have cost a try. Leaney chased winger Komachi Imakugi more than 80m in all before she fell on the bouncing ball to save the day 5m from her tryline.

Early in the second half, prop Madi Schuck held up the Japanese over the line for another vital save.

At the 48-minute mark, the Wallaroos made an error too many. Flyhalf Arabella McKenzie spilt a pass in midfield that just reached her from halfback Iliseva Batibasaga. She tried to turn it into a flip-on between her legs.

Japanese flyhalf Ayasa Otsuka swooped on the loose ball and ran in the try. She converted for 7-0.

It was the jolt the Wallaroos needed because everything became more urgent and direct from that point.

Flanker Emily Chancellor kicked and chased strongly to set up a bridgehead deep in Japanese territory. Hooker Ashley Marsters mauled the ball over the tryline for 7-5.

The Japanese bounced back by applying more pressure of their own and Japanese flanker Kyoko Hosokawa sliced over from close range for 12-5.

The Wallaroos had deliberately held back their top front-row so Liz Patu, Bridie O'Gorman and Adiana Talakai could make their impact with size and a more direct game over the closing stages.

Talakai speared over off a well-working rolling maul off a lineout win but Lori Cramer had no joy with the conversion.

Cramer had a chance to steal a win at the 77-minute mark but the normally reliable goalkicker sprayed a shot at penalty goal from a gentle angle.

Hamilton and Friedrichs were both impressive again. McKenzie is a quality No.10 but this was a night to be a shrewd game-controller and she will know she has plenty to work on.