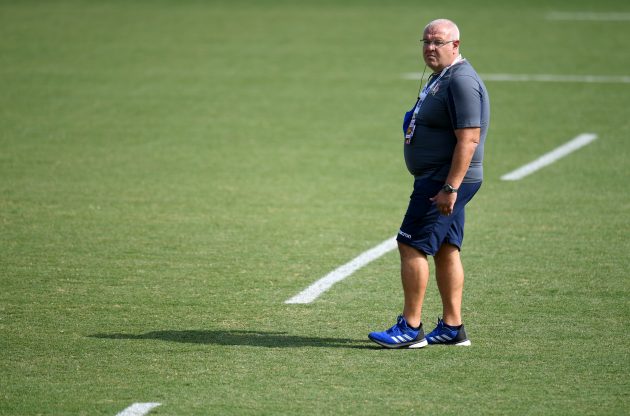 Andrea Di Giandomenico is to retire as coach of the Italian National Team at the end of 13 years as coach which culminated him taking his team to the quarter-finals of the Rugby World Cup.

Di Giandomenico will continue to work in the training of coaches, a role he has held in the Italian Federation since 2016.

Born in 1975, Di Giandomenico was a fly-half for his local club, L’Aquila from 1994 to 2000. He switched to coaching in 2004, and was appointed coach of the Italian national team in 2009. His first match as coach of the Azzurre was on February 5 2010 in Ashbourne, for the Six Nations game against Ireland in a tournament where Italy went on to beat Wales in Bridgend - Italy's first away win in the Championship.

It was the start of a career that saw him in charge of Italy for 93 test-matches, including 62 in the Six Nations and nine at two World Cups, where Italy ended in ninth place of 2017 in Ireland and the fifth in New Zealand last October. He was the first coach to lead any Italian national team to a World Cup quarter-final.

The most successful Italian coach ever, Di Giandomenico's other outstanding achievement was second place in the Six Nations 2019 – the best ever finish for any Italian team in any Six Nations – when they recorded three wins, and a draw . Di Giandomenico also contributed to the development of the women's national sevens team, of which he was coach from 2009 to 2016.

At the same time, he has been trainer of coaches and athletes for the federation, a tutor in the national Training Centre, Technical Manager of the U18 Training Centre in Milan and, since 2016, Assistant Manager for Coach Training.

Federal President Marzio Innocenti said "In over twelve years at the helm of the Women's National Team, Andrea has built an extraordinary group, on and off the field, obtaining results that have given and give prestige to Italian rugby. His works speaks for itself, with the runners-up place at the 2019 Six  Nations, the two consecutive qualifications for Rugby World Cups, and the quarter-finals at the last world championship. He has played a key role in raising awareness women's rugby and, through the results, attracting girls to the Game. Even in the most difficult moments, sportingly or during the pandemic, he never lost his direction. A chapter closes, but he will be able to continue to offer an important contribution to Italian rugby in the new positions he will occupy".

Daniele Pacini, FIR Technical Director, underlines how 'the imprint on the game that Andrea transmitted to the Azzurre during his stay at the helm of the team is the mirror of the Italian technical identity, to which he has given in recent years a great contribution not only through the women's national team, also through the training of coaches and coaches.

The results obtained on the occasion of the last Rugby World Cup, without forgetting the previous ones, go far beyond the sporting result, taking into account how they were achieved. I thank Andrea for what he has left to the women's game, not only in Italy, and I wait for the new challenges that as a Federation we will face together'

Announcng his retirement Di Giandomenico said 'It is essential to thank also on this occasion all the people who have supported me in this long professional journey: the Federation, first of all for the trust placed, the possibilities offered and, finally, the constant support; the staff with whom I have had the pleasure of collaborating over the years; The clubs that have always placed their trust in me and, the main protagonists of this extraordinary sports project, the players. We shared journey, a path that contributed deeply to my training and development. I will take these memories with me to my future assignments and I will remember fondly everything we experienced over the years".