Wales ended their best Six Nations for over a decade with a third place in the final table, despite being disappointed to lose to Italy in the final seconds of the game. 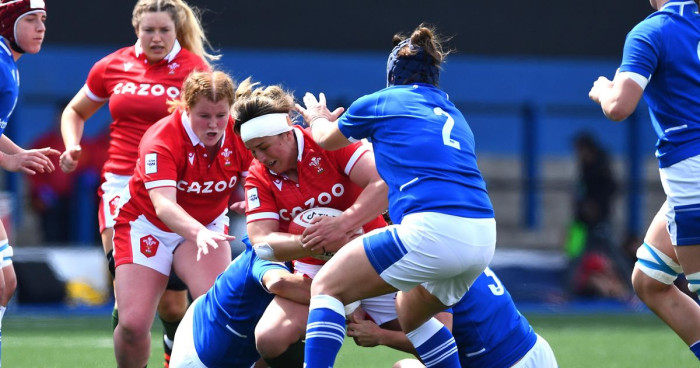 The Italians scored their only try of the game when Wales were down to 13 players amid two yellow cards. Fly-half Robyn Wilkins and No. 8 Sioned Harries were both sent to the sin bin in quick succession during the first half. Wales defended brilliantly and very nearly managed to see out the ten minutes before flanker Beatrice Veronese cut through the Welsh defence and offload to scrum-half Sara Barattin, who dotted down for 32nd minute which Michela Sillari successfully converted for the omly score of the opening 40 minutes.

Despite having most of the possession Wales did not get on the scoreboard until the 71st minute through a successful Wilkins penalty kick, but looked to have clinched the game with an unconverted try from replacement scrum-half Keira Bevan in the 75th minute to give Wales a single-point 8-7 lead.

But hopes of a last-minute win were dashed when Michela Sillari won it at the death with a successful penalty kick after Wales were deemed to be offside.

Despite the disappointing conclusion to a positive campaign - Wales' first since 12 full-time and 12 part-time Welsh Rugby Union contracts were awarded - Wales still celebrate their best tournament finish in 13 years, having secured third place for the first time since 2009.

Wales boss Cunningham had made eight personnel and two positional changes to the starting team which lost to France in round four, with the emphasis being placed on starting strong after final-quarter comebacks to secure wins against Ireland and Scotland in the early rounds of the tournament.

The hosts started well but failed to convert dominance and possession in the opening 20 minutes into any points, while their malfunctioning lineout, errors and lack of kicking range caused problems of their own. Italy, who recorded their second win of the tournament, were happy to slow down the ball at the breakdown to further frustrate Wales.

Wales flanker Alisha Butchers made an encouraging clean break in the opening few minutes and Lisa Neumann threatened to score twice, but preventing Italy from scoring while missing two players was always going to be a tough ask. Wilkins was yellow carded on 20 minutes for a high tackle, before referee Amber Maclachlan was back in front of the big screen with the TMO a minute later to send Harries to join her for a similar challenge.

Wales' scrum and a strong defence were enough to repel Italy's attacking threat in the first two instances, with the ball behind held up on one occasion the women in blue crossed the line, but Wales' defence cracked to allow a try before the yellow-carded duo returned to the fold.

Captain Siwan Lillicrap, who had been battling a sickness bug, was replaced by lock Natalia John after the break and Wales upped their tempo in the second half as Cunningham introduced his replacements.

Carys Phillips was brought on to try and steady the lineout, with mixed results, Keira Bevan replaced Ffion Lewis to add some tempo, and utility back Lleucu George came on as another kicking option as Kerin Lake made way at centre. Caryl Thomas also returned to the fold after a prolonged concussion lay-off, while Cerys Hale formed a new-look second-half front-row, Bethan Lewis came on in the back-row and Kayleigh Powell replaced Niamh Terry at full-back.

The match ended with a series of penalty scrums to Wales as they went in search of a winning score, which a try coming from Bevan after a Harries offload. But Wilkins missed the conversion, with a tense few minutes following in front of 3,373 fans as Italy managed to win a penalty in the 79th minute and secure a dramatic victory.