Italy drew 17-17 against Japan, sixteenth in the international rankings, in the test-match in L'Aquila that marks the start of a new season Di Giandomenico’s team, building on their second place in 2019 Six Nations 2019 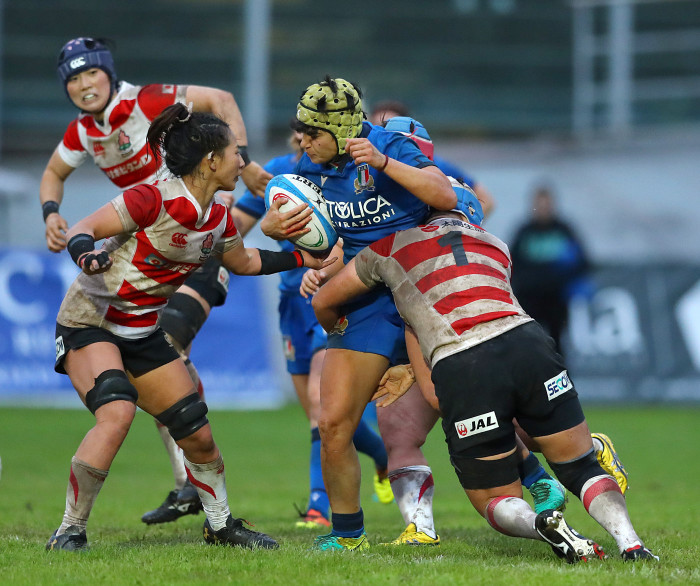 Report and photo: Italian Federation: Lacking several veteran players - including captain Manuela Furlan - the Azzurre, sixth in the world, showed their rugby only in flashes, while their opponents, with a well ordered defence and back line, after first going ahead and then falling behind to Italy, managed keep in the match, and came within touching distance of a sensational victory in the final stages.

An enthusiastic crowd of over 2500 attended the game in Di Giandomenico home city.

Italy, significant favourites before the start, started at pace to try to get the game going in the right direction, but the Asian champions made it clear that it they were not overawed and had come to compete.

In the ninth minute the visitors were the ones to go ahead, with the wing Kasai touching down after a series of drives by the Japanese forwards had been stopped by the blue guards.

Arrighetti and her teammates tried to take back control of the match immediately, but struggled to maintain quality possessions on a pitch made heavy by the rain, but they put pressure on the Japanese inside their 22: repeated penalties given by the visitors resulted in a yellow card for winger Taniguchi shortly after the twentieth minute, shortly after which Sofia Stefan who, after a scrum on 5m, found way into goal to tie the score.

After that, even a player down, the Japan still managed to defend well, despite the Italians maintaining possession for a long period.

The Japanese managed absorb Italian pressure until the thirty-fifth minute, when Stefan finally found a way through, with Sillari adding the extras for 12-5.

But Japan responded immediately with captain and prop Minami carrying the ball over the line after a series of pick-and-goes: the kick was missed, leaving the score at 12-10 to Italy at halftime.

Japan made three changes at the start of the seconf half and tried to seize control of the game, but disciplined Italian defence held them at bay.

When Italy broke from defence a series of Japanese infractions and resulted in an attacking line-out for the Italians that set up a maul from which Lucia Cammarano was able to touch down for a 17-10 lead after Sillari failed to convert from a tight angle.

The lead did not last long. After Hirayama converted the try of backrow Saito and the score was tied at 17-17.

In the dying minutes a Japanese charge down resulted in a race to the ball which was only narrowly won by Rigoni for Italy.

"Credit to Japan for having dealt with this game’s intensity. We in certain situations have given up playing and struggled to express our rugby, but even this is part of our growth path as a team. The Japanese have been able to put us in difficulty, and we will have to reflect on the direction of the game. It is the beginning of a long season, we are not worried and we look at the next challenges with confidence said Andrea Di Giandomenico after the game.