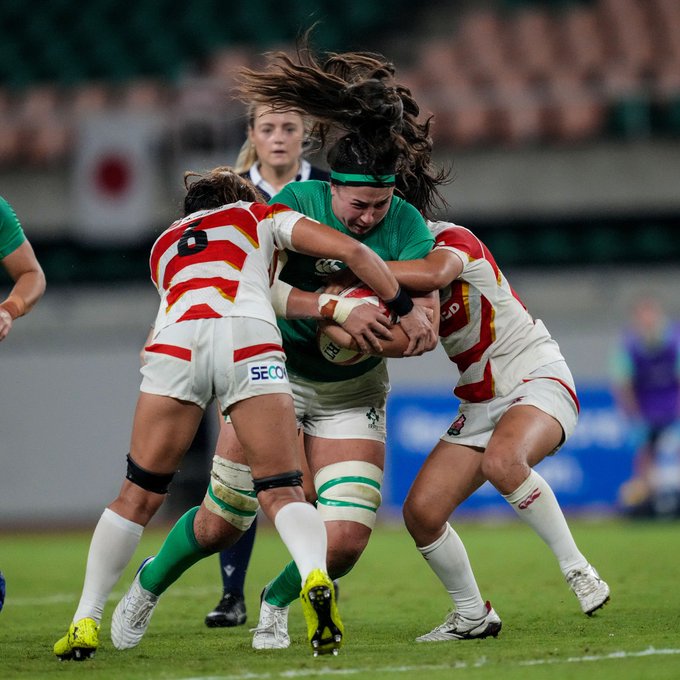 Ireland fell 15-0 behind early on, and not only did they complete their biggest ever comeback win, they produced their best display in several years to demolish what ended up being a poor Japanese side.

Neve Jones joins Lynne Cantwell, Sophie Spence and Alison Miller as the only Irish women to score a Test hattrick, while six others crossed the line, including debutants Aoife Dalton and Méabh Deely.

All four of the starting debutants excelled, with Dannah O'Brien running the game excellently at out-half, and kicking six of her nine conversions, while Natasja Behan almost scored a late try, after claiming a brilliant crossfield kick.

But it was a result that seemed a long way away after two Japanese tries and a penalty put them 15-0 ahead after just 11 minutes.

Only after this shock start did Ireland settle down, ad start going through the phases. This soon won them a penalty, which led to the first try, Neve Jones touching down for Ireland, with Dannah O'Brien converting - her first points in Test rugby.

That try was one for the forwards to savour though; with a lineout just inside the Japan 22, they marched their maul all the way to the line before Jones finished the job.

Nine minutes later, and a second try. A midfield scrum which Ireland dominated and forced advantage, before they moved it wide through the hands. Enya Breen found the first gap, before playing in Méabh Deely, and the debutant held onto the ball for just long enough to suck in the last defender, before popping to Aoife Doyle who ran in to score. Ireland were just three points behind.

Then, just before the break, Ireland went ahead. Aoife Dalton powering over for a try on her debut. O'Brien's converting 15m in from the right touchline gave them a 19-15 half-time lead.

The second half belonged to Ireland.

Two minutes from the restart Neve Jones scored her second try from a maul, and a maul also resulted in another try after 54 minutes, Nichola Fryday getting this one down. Two minutes layer Méabh Deely scorched her way through the Japan defence to score a sensational try on her debut, and it was 38-15 to Ireland.

Japan briefly went on the offensive, and a quick-tap penalty Makoto Lavemai forces her way over to score pulled them back to 38-22.

With ten minutes to go Chloe Pearse scored a seventh try for Ireland! Sam Monaghan blocked a clearance kick, and Pearse reacted fastest to latch onto the loose ball and score.

Ireland reached 50 points three minutes later, replacement scrum-half Molly Scuffil-McCabe spotting a gap at the side of a ruck, and sprinting through the heart of the Japanese defence. And finally Emma Hooban punched her way over from short range from the final play