Hong Kong ran in five tries, two of them for Jess Eden, to record a 31-17 triumph against Kazakhstan in the first of two home tests as test rugby returned marking their returned to test rugby after the pandemic.. 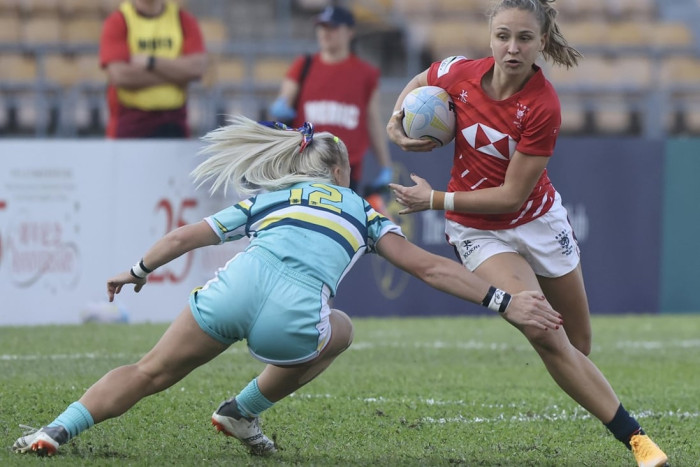 After three years of Covid-related inactivity, the shackles came off for Hong Kong’s women’s rugby team on Saturday as they earned victory over Kazakhstan.

Patience had been a watchword since their last outing in November 2019, and it was a hallmark, too, of their 31-17 triumph at Siu Sai Wan Sports Ground, in the first of two home tests.

Head coach Royce Chan Leong-sze would later describe the hiatus as “a grudge” and this match – her debut in charge – as a chance to “blow it out”. Joy unbounded among Chan’s squad at full-time testified to its release.

Fly half Aileen Ryan’s opening penalty was rapidly eclipsed by a determined first quarter from the Kazakhs that brought tries for centre Lyudmila Sherer and full back Galina Krassavina. Hong Kong hit back, working an overlap on the right for Jess Eden to score.

Camped in the visitors’ half and provoking repeat infringements, Hong Kong sought five points rather than three, almost getting them past a vulnerable-looking Kazakh left side before they switched flanks to send in full back Vivian Poon Hoi-yan at the corner.

They led 13-12 at the interval and straight after it battered away in front of the posts until the defence was sucked in sufficiently for Natasha Olson-Thorne to find a gap and touch down.

Her side were bossing the territorial battle and drawing errors from fading opponents, who found themselves scrummaging for their lives on their try line for an extended spell.

Kazakhstan’s kicking could not get them out of their half, allowing the Hongkongers to go again and again. Approaching the hour mark, the inevitable could be delayed no longer as another Hong Kong scrum feed offered a platform. This time, Eden would not be denied her second score of the afternoon.

A 23-12 lead for which they were good value was whittled away almost from the kick-off when a charge-down gave alert Kazakh wing Amina Tulegenova a simple run-in.

But it did not deter Hong Kong as Agnes Chan’s try and Ryan’s second penalty gave them breathing space.

“At half-time we re-emphasised our strengths,” said Royce Chan, adding that preparing for next Saturday’s second test at Hong Kong Football Club would start with mental recovery to “calm ourselves down”.

“It’s not going to be tactical or technical – the teamwork is there,” she said. “We did our first job; now can we do our second job better?”