Hong Kong came from behind to win the second test in their two game series against Kazahstan, and with it the series and (in the absence of all other teams) the Asian Championship title. 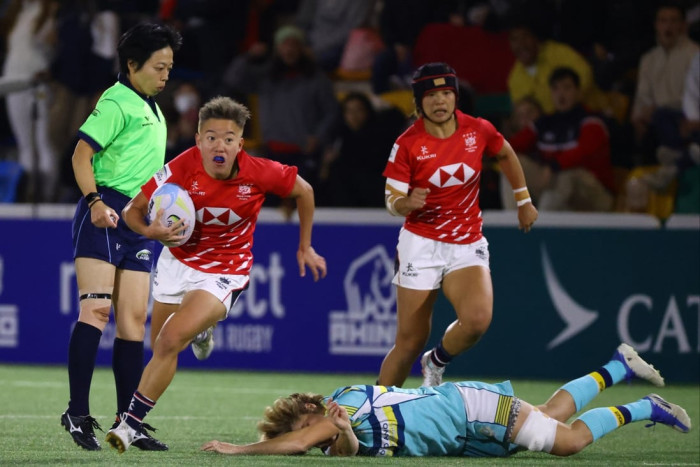 Kazakhstan had led all the way in the second of two tests at Hong Kong Football Club on Saturday, only for Zoe Smith’s try and Ryan’s conversion from the touchline in blustery conditions to make it 14-12, turning the tables in dramatic fashion.

It was the Kazakhs who appeared to be rotating the furniture for much of the contest, staying the pace after fading in defeat a week earlier, and building a 12-0 lead that looked sufficient as Hong Kong struggled to break them down.

The visitors had the stand-out player in Lyudmila Sherer, whose try against the run of play at the end of a cagey first half prevented it finishing scoreless and seemed to sap the home team’s resolve. Only at the death did they recover.

With a number of kicks from hand drifting off-course, and fly half Ryan seeing an early penalty attempt blown wide, keeping ball in hand was the smart option, even if gains of single-digit metres were the norm. Bucking that trend was full back Vivian Poon Hoi-yan when she darted infield with her trademark step before encountering traffic.

After a period of patiently working through phases, Hong Kong went wide. A pass went to ground and was hacked upfield, but that hiccup opened the door to a highlight of the half.

Collecting the loose ball to run it back from deep, wing Jess Eden jinked her way past half of Kazakhstan to advance beyond halfway. With support runners taking it on, a try beckoned, until a pass was fumbled.

Although adept at recycling possession, Kazakhstan were doing it the wrong side of halfway, as Hong Kong defended with shape and focus. Outside centre Sherer was punching holes in the wide channels but the movement was mostly lateral.

A charged-down kick from full back Balzhan Koishibayeva, whose resulting drop-out sailed into touch, kept them hemmed back and again showed the risk of going to the air. When her side finally got into Hong Kong’s territory, they transgressed on the floor.

It was from halfway, however, that they found a gap in the red wall, when inside centre Alina Askerova burst through at pace and fed Sherer.

The visitors re-emerged galvanised by that breakthrough, Koishibayeva looping wide and wing Veronika Stepanyuga eating up further metres. A scoring opportunity was spilled, but when Hong Kong cleared they found Koishibayeva, who bounced off would-be tacklers on her charge to the whitewash.

At 12-0 down, Hong Kong tried the aerial route again and it paid off as Amina Tulegenova coughed up the ball near the corner after 55 minutes. No points came, though, from their spell camped on the try line.

They could not get in range again until, after successive tap penalties, Maggie Au Yeung Sin-yi was driven over for a score that Ryan converted for 12-7.

That left seven minutes to make up the deficit, of which less than one remained when Smith slipped through a forest of bodies in the left corner. Even then, Ryan had it all to do.

“The first half didn’t reflect how we played and the girls were a bit disappointed,” head coach Royce Chan Leong-sze said. “The bench players did a massive job to bring the energy up and the last 20 minutes was awesome.

“I hope the girls can start believing in themselves. The first try, then the second try and the kick – massive, in such a pressure game. I think they deserve the win.”

Asia Rugby also declared that as a result of winning the series, Hong Kong were the 2022 Asian Champions – which may have come as a surprise to Hong Kong as they had told at least one Asian Rugby journalist that this was not a championship event. However, with Japan resting after the World Cup and no other nations playing currently test rugby in Asia, that is what Hong Kong are.