Harlequins and Saracens will once contest the Allianz Premier 15s final, with both coming through their home semi-finals to secure a place in next weekend's showpiece in Gloucester. 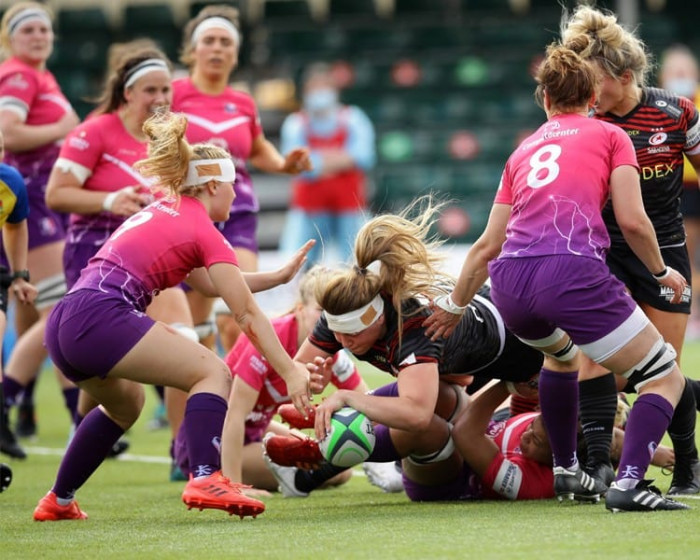 Harlequins will get a chance to win the Premier 15s title for the first time thanks to a deserved win over Wasps at the Stoop.

Quins took a decisive lead into half time and turned around 18-0 up and added seven more after the break.

In a first half that the home team dominated, Ellie Green chipped in with two penalties and a conversion with Vic Cornborough and Jess Breach grabbing tries in a 35 minute-window where Wasps showed promise but were ultimately unable to deal with the power of the Quins pack, where Sarah Beckett, Cornborough and Amy Cokayne made hay with ball in hand.

With Leanne Riley marshalling things brilliantly behind her on-top pack, Quins took an early 3-0 lead before Cornborough powered over on 20 minutes.

Wasps had no clear cut chances and when Laga Tuima threw a perfect no-look pass to Jess Breach, the England winger cut loose and sprinted home.

Wasps started the second half much stronger, with Ireland flanker Claire Molloy coming off the bench and making an impact and with England winger Abby Dow getting an early try under the sticks.

Quins hit back immediately – with Breach again racing over after an inside pass from Rachael Burford and when Green made it 25-7 it looked a long way back for Wasps.

The visitors though were much improved - Maud Muir up front impressing and Katie Mason helping speed things up off the bench. Dow almost scored again but was held back by an excellent Breach tackle.

There was a lengthy break in play with Breach stretchered off after landing awkwardly, but Wasps scored immediately through replacement Andrea Stock to make it 25-14 with under ten mins left. But though they managed to build some momentum up, it was too little too late.

Runners-up twice, Harlequins will get a chance to make it third time lucky next weekend.

Saracens are on course for another title after coming through an exciting game in front of their home fans with sisters Poppy and Bryony Cleall scoring two tries each.

Loughborough came out the blocks firing, winning a penalty on the 22 which was kicked to the corner, before Lark Davies powered over.

The try was converted but Saracens hit back immediately when Poppy Cleall powered over to score from close range.

Zoe Harrison kicked the conversion and the scores were tied, but Loughborough went back in front after a superb no-look pass from Emily Scarratt which put Rhona Lloyd through under the posts.

Bryony Cleall then got on the scoresheet with a drive for the line, adding a second minutes later from a quickly tapped penalty.

Harrison made it three conversions from three before Loughborough scored a third try of their own through Davies, who once again was at the back of a Lightning lineout drive to score.

Saracens extended their lead after half time through Poppy Cleall, who scored her second after pouncing on a loose ball a few meters from the try line before diving over it to score.

The second half was a far more attritional affair than the first and the visitors struggled to break through an excellent home side defence.

Loughborough had an excellent opportunity to score with 19 minutes remaining, but Sophie de Goede got in a good body position to make the turnover and keep Sarries in control.

However, Saracens went down to 14 when Vicky Fleetwood was shown a yellow card and they could not stop Loughborough’s fourth try being scored from another rolling lineout drive.

The try wasn't converted though and Saracens held on.