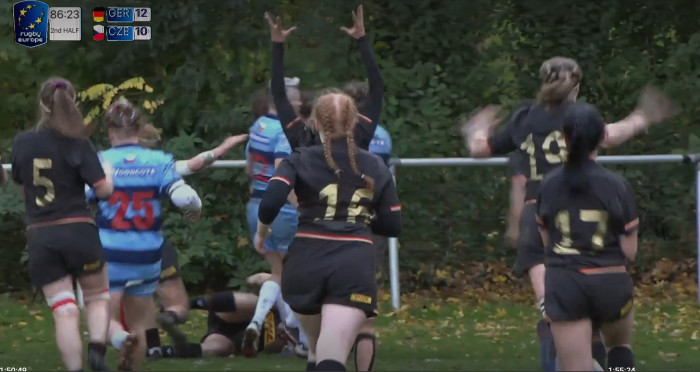 After a 43-5 drubbing in Helsinki two weeks before, former Trophy champions Czechia looked a tough opponent for Germany in their second game, but they came out ahead in a tight game.

Czechia began confidentially, but failed to capitalise on having most of the early possession, a strong German defence keeping the score to 0-0 for the first half-hour. Germany finally managed some sustained pressure at the Czech end for the final quarter of the half, but the scoreboard remain blank at the break.

The first score did not come until the 50th minute, when Pavl’na Cuprova finally broke the deadlock, scoring in the corner after some fine support work from the rest of her team.

Fine minutes later Cuprova doubled her teams lead with a terrific run, down the opposite touchline, the Czechs now leading 10-0.

Viktorie Lancova had a chance to further extend the Czech lead with a penalty after 64 minutes, but it slipped wide.

Entering the final 10 minutes, Czechia still lead 10-0, but after a long break for a Czech injury, German full back Laura Schwinn put her team on the board. Schwinn converted her own try from the touchline to take Germany within three points of Czechia with just eight minutes left.

Into the final minute, and a German knock-on right on their own line resulted in a scrum and a chance to end the game. But the clearance kick from earlier heroine Cuprova failed to find touch and only found the hands of Germany’s Steffi Gruber, who raced back score and win the game for Germany.