France’s Elite 1 league is now midway through the play-off phase. 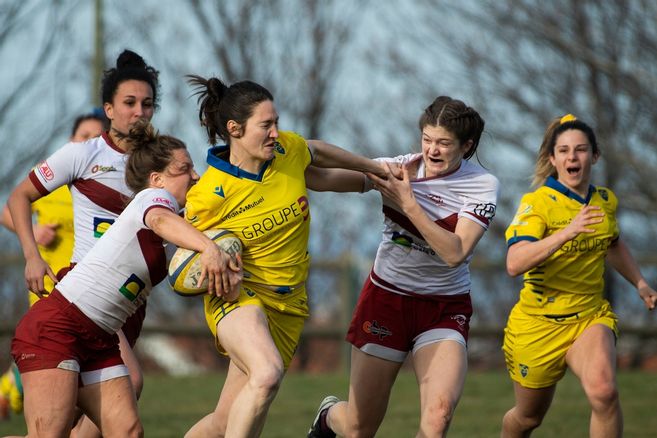 France’s Elite 1 league kicked off back in September and, despite postponements and delays, is now more of less back on schedule for a final in June.

The top two teams from the four first round pools have qualified for the Playoffs, split into two pools of four. The bottom teams are in “play down” pools, similarly split.

This phase has also suffered postponed games, with champions Montpellier missing all their games in early March before returning to the field last weekend. After laying waste to every team they had played all season their return saw them win only 19-5 at Rennes – though several leading players were unavailable preparing for the Six Nations.

Montpellier’s other postponed game was their home match against Blagnac, which should be their biggest challenge of the season to date. That match has now been moved to the end of May, which means that the two teams will meet home and away in the final two weekends before the final.

Toulouse are lead in Poule 2, but only after beating Romagnat 36-27 in the second weekend.

These four teams – Montpellier, Blagnac, Toulouse and Romagnat – are now clearly the four strongest sides in France, Jessy Tremouliere’s having a big impact on her return to Romagnat transforming a team that struggled in the last season before COVID.

Tremouliere’s has been on target with the boot – clearly leading as the league’s top kicker – form she will take into the Six Nations.

Also on form for the Six Nations is Montpellier’s Cyrelle Banet, whose 13 tries for Montpellier has been a big reason behind their success so far. Lenaig Corson and Marine Menager from the Six Nations squad have also had a good domestic season with half a dozen tries each.

The league now takes a month off but Covid remains a threat to the resumption of the league after the Six Nations. The “play down” has already been hit by postponements affecting both Bobigny and La Valette, and the country as a whole looks like entering a third wave and another possible lockdown. Although it is now more or less back on schedule, whether the season can be completed remains to be seen.