France retained their European U18 sevens title with flair, style – and by a wide margin in Prague today. 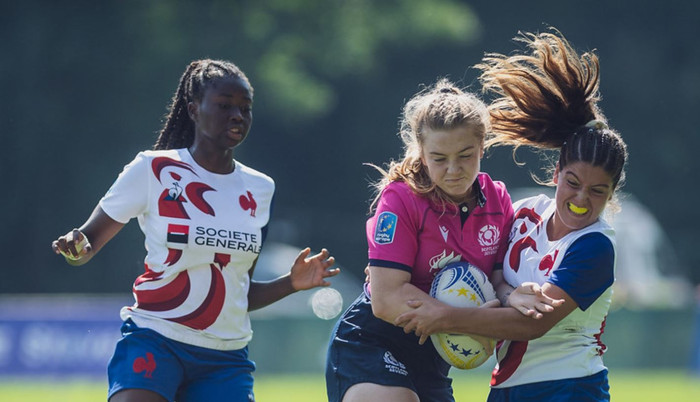 France were on another level to the rest of the field in Rugby Europe’s U18 Championship.

After a gap of three years, the tournament returned with a nine-team field and a complex format that featured three rounds of games, each round featured three pools of three teams.

The same format was used to the Trophy tournament and, for all the complexity, works well.

France have been imperious at this level now for some years. This group’s predecessors were European Champions in 2018 and 2019, and World University Champions, and silver medallists at the 2018 Youth Olympic. This group promise to be even better.

France swept through the first day without conceding a point, and repeated the feat at the start of the second – even upping a gear or two as the passed 60 points against both Scotland and Portugal.

Second and third seeds England (runners up in 2019 and winners in 2017) and Ireland were also comfortable winners of their morning pools, which also saw a return to international rugby by Ukraine.

Ireland also saw off their opponents in the second round of pool games, split over the two days, to reach the championship pool alongside France, but – in what was in effect a knock-out game - England were beaten by an exciting looking Spanish team 29-5, meaning that the best they could hope for would be fourth.

The final round saw the pools that would decide the final positions.

First up scenes of infectious joy and happiness saw Ukraine win both of their games again Portugal and Belgium to end the tournament in seventh place.

England came up against Czechia for fourth and conceded an early score, but recovered well to win 28-10.

The championship pool was, needless to say, won by France who conceded their first and only score in their opening game against Spain, who went on to finish runners-up – a positive outcome for the future of a nation renewing itself at World Series level.