France started their Six Nations with a win 39-6 against Italy in front of a 13,728 crowd in Grenoble. 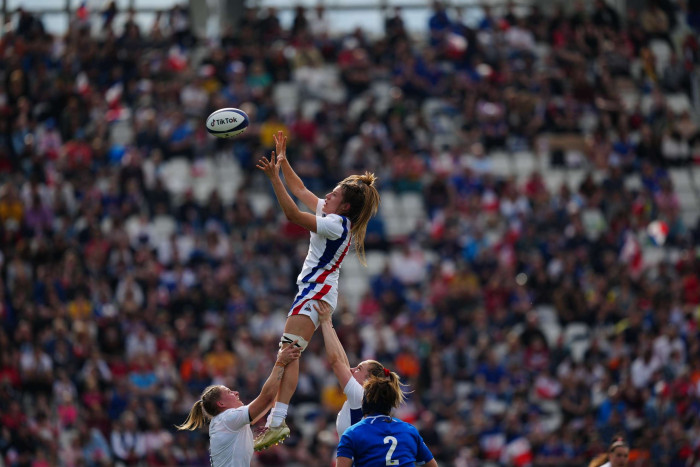 They love their women’s rugby in Grenoble, and 13,500 (a record for this fixture) turned up to see a French performance that at time mirrored England against Scotland the previous day.

As with that game, France were guilty of making too many unforced handling errors, but also managed to get away with it with Italy not taking full advantage.

However Italy were tougher opposition, and while a French win always seem the only outcome, they did not allow France to run away with the game. Beatrice Rigoni in particular – playing her 50th game – was astonishing throughout, with most of Italy’s opportunities coming from some piece of brilliance from the fly-half.

Indeed, after an early exchange of penalties, Italy came close to scoring the opening try, the move started and very nearly finished by Rigoni.

Two tries in ten minutes made the game more comfortable for France. The first was a fine team try ended by Madoussou Fall after 18 minutes, then a brilliant dummy by Emeline Gros put her under the posts on 26 minutes, and France lead 17-3.

But the handling errors and strong Italian defence prevented further French scores, while a second penalty just before the break allowed sent France in 17-6 ahead.

The same pattern continued into the second half, with the game increasingly failing to flow. France scored a third try midway through the half with Lea Murie getting the score after one of the few back row moves and with Laure Sansus coming off the bench to up the tempo.

There seemed a real danger that France would miss out on the bonus point until with five minutes to go Emilie Boulard broke the Italian line to sprint away and score, taking France to 32-6, before Chloé Jacquet added a fifth try just before the end - with Sansus again providing the killer pass.

There is work to do for France before Ireland's visit next weekend, while Italy face the daunting challenge of England at home.