France have begun their Six Nations with a dominant 53-0 win against Wales. 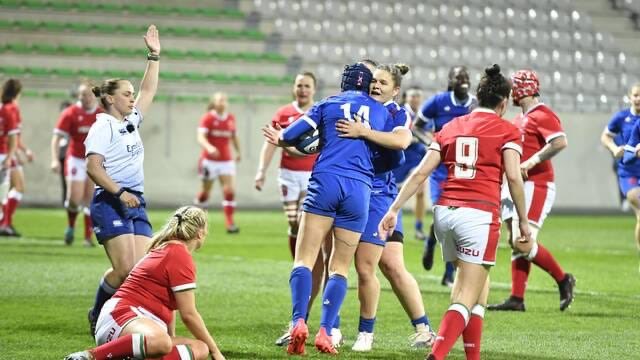 How France would play without their home crowd behind them, and how Wales would play “under new management” were the big questions before the game. The answer to the first was France played as well as we have seen them play for some time, especially in the first half when the handling and interplay was almost like sevens at times, as a result of which Wales were simply not allowed to play

France began at a great pace, recycling the ball at speed, throwing Wales onto the back foot, and within three minutes Caroline Boujard spotted a gap, going through the middle of a ruck to score the first try. Bourdon converted, and France were on the board. Three minutes later and another gap opened up in front of Boujard after a turnover by Gross. 14-0 to France before Wales had draw breath.

Wales began to find their feet after this, even winning a French scrum, but a kick ahead allowed the French to run back at them, Émilie Boulard – who was having a wonderful debut – starting a move that swept 80m down the field ending with a third try for Boujard. 21-0 to France, 14 minutes gone.

Bourdon added a penalty on the half hour, and four minutes later a typical French maul gave France their bonus point try, Agathe Sochat touching down. Bourdon hit her fifth kick and France were 31-0 ahead – which is how the first half ended.

Émeline Gros added a fifth try after 53m, breaking away from the dominant French scrum to score under the posts – but the conversion was charged down by Jasmine Joyce. 36-0.

Safi N'diaye had a try disallowed for a knock-on on the hour, but France drove back the resulting Welsh scrum and Gros was on hand again to touch down. Bourdon went a little further back to successfully convert. 43-0.

Sansus replaced Bourdon, and was soon dancing through the Welsh defence only to be held up over the line. The ball was worked out to Boujard, but impressive Welsh defence again held the player up. But France could not be stopped for long, and great interlinking play down the line saw Émilie Boulard start and end the move with a try on her debut. 48-0.

Finally Laure Touyé ended the scoring from another maul from a lineout. 53-0 the final score.