Four tests in one day!

August ended with four test matches in one day as World Cup preparations continued. What happened? 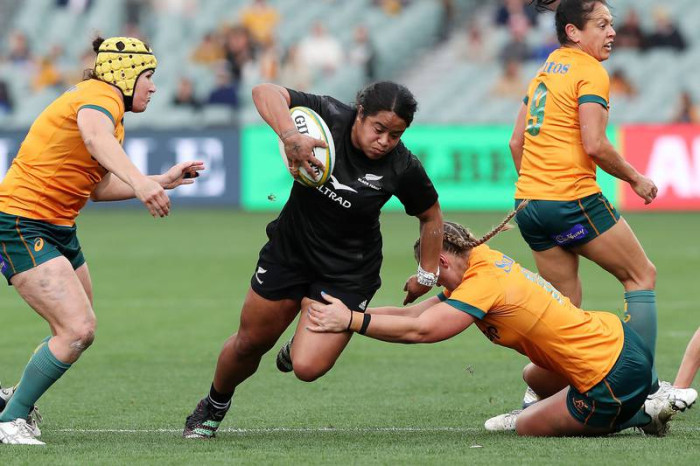 New Zealand came from behind to beat Australia to start the day.

The Wallaroos might have lost but they gained some respect after a positive performance against the Blacks Ferns at the Adelaide Oval.

Jay Tregonning’s Wallaroos were hammered 52-5 last week on their travels, but in front of their home fans Australia fought until the death and finished on a high note despite going down 22-14.

Early on the Wallaroos tore into the game. Bienne Terita’s nerves got the better of her early as the 19-year-old missed a try chance out wide, but the rising sevens star made no mistake second time around as she grabbed the opening try. Arabella McKenzie’s sideline conversion went over and the Wallaroos were 7-0 up.

But despite holding a numerical advantage after centre Chelsea Semple was shown a yellow card for an upright tackle that saw her unfortunately knocked out, the Black Ferns dominated the next hour.

While the Wallaroos were dogged and led by their backrow of Emily Chancellor, captain Shannon Parry and Grace Hamilton, they couldn’t turn the ball over and work their way out of their own half. Eventually the pressure told and the visitors struck back through hooker Luka Connor.

Second-rower Joanah Ngan-Woo then scored New Zealand’s second try early in the second half and it appeared as if the Black Ferns were off and running and would not be stopped.

But Terita’s second try for Australia saw the Wallaroos take something from the match, which despite the defeat was Australia's best ever result in 22 games between the sides.

A win is a win for New Zealand but losing co-captain Kennedy Simon to a calf injury and midfielder Chelsea Semple to concussion will be a concern to the coaching staff.

Scotland were always in this contest, and led against the higher ranked USA until the final qurter of the game.

The home team had a perfect start. An early knock-on from the visitors enabled Helen Nelson to fire Scotland deep into USA territory - but the ball rolled agonisingly into in-goal. From the drop-out, Lisa Thomson gathered and triggered Chloe Rollie, on her 50th cap.

The full-back looked to have been obstructed but, no matter, a penalty was awarded at the subsequent breakdown. Scotland opted for the touchline, Sarah Bonar was the target, and her pack then got the driving maul powering forward for Lana Skeldon to claim the touchdown.

A scrum penalty gave Alev Kelter the chance to land the Eagles’ first points.  Katana Howard carried menacingly and though Scotland copped well as the Americans went through the phases, eventually loose-head prop Rogers surged over for the Eagles’ opening try.

Rhona Lloyd then finished superbly stepping inside the cover and then having the strength to dot down in the corner. Nelson’s conversion was a peach and Scotoand were ahead.  Cantorna’s penalty closed the gap but the menace of Kelter, Charlotte Clapp and Hope Rogers was stamped all over the Americans’ next attack which ended with Kate Zachary thundering over in the corner to lead 14-16.

Nelson kicked a penalty to edge Scotland back in front at the break and on the turnaround Scotland opted for the touchline from an early penalty and from Emma Wassell’s catch, Leah Bartlett led the wave of attacks for Jade Konkel-Roberts to make one of her trademark breenges but she was held up.

Into the final quarter and the Eagles made inroads deep into the Scotland 22 from a powerful driving maul. Scotland blunted that attack but at the expense of a penalty, from which Rogers tapped and powered over. Kelter missed the conversion (17-21, 63 mins).

Rollie made a brilliant try-saving tackle on Clapp as the game entered its dying minutes and Scotland tried valiantly to break the shackles. But it was not to be in spite of a sustained attack with the clock in the red.

Japan bounced back from a heavy defeat last week to beat Ireland in an impressive performance.

Ireland scored early when Ailsa Hughes duly broke to the right of a maul and passed for Natasja Behan to finish forcefully past Megumi Abe.

But Japan looked a much better side this week drawing level in the 16th minute, the livewire Megumi Abe turning scrappy scrum possession into a try as her inviting pass put her half-back partner Ayasa Otsuka through a gap to score.

Japan were showing a marked improvement around the contact area and in contesting the breakdown and an inconsistent Irish lineout, coupled with some subsequent penalties, allowed the hosts to press on the half-hour mark. A crisply-executed backs move off a scrum saw Rinka Matsuda released and she bounced off Edel McMahon’s attempted tackle to score.

Otsuka converted and it was 12-5 at the break.

Japan’s industrious work in retaining possession and chipping away closer to the line ended with Otsuka’s skip pass putting winger Hinano Nagura over on the right in the 49th minute.

Just six minutes later, 17-5 became 22-5 thanks to a superb solo try. Gobbling up a long bouncing pass, Matsuda swatted away Behan on the Irish 10-metre line. She tore up the left wing towards the Irish 22 and shrugged off Deely too as she brilliantly completed her brace.

Japan scored again when Kato neatly put Iroha Nagata charging through a gap before crashing over herself for a try from the resulting ruck. Otsuka turned it in a seven-pointer, effectively sealing Japan’s first ever Test victory over Ireland.

Seina Saito became her country’s most-capped women’s player on the night, and it took a strong tackle from Chloe Pearse to hold her up behind the Irish posts.

This was Canada's final warmup game for the World Cup and on this evidence they'll be full of confidence heading to New Zealand after a fine win on home soil. .

Tries from Paige Farries (2), Fabiola Forteza, Maddy Grant and Justine Pelletier as well as a string of successful conversions from a combination of Brianna Miller and captain Sophie de Goede were enough to seal the victory.

The game began with early pressure from visitors Wales. Sioned Harries powered her way through in midfield to gain the territory and had solid support from Kayleigh Powell to keep Wales in control.

Another penalty against Canada allowed Elinor Snowsill to put Wales deep in the corner for the lineout but a spill from the Welsh allowed their opponents to clear. But a clearing kick not finding much ground gave Wales a second chance in the 22 with the throw-in.

Quick ball out wide off the back of a lineout saw Jasmine Joyce mark her return with a spectacular linebreak to bring Wales within metres of the line before being brought down. Despite turning Wales over on the line, a penalty against Canada allowed Snowsill to slot the three points to open the scoring.

Canada soon found a foothold in the game, though, led by their dominant pack. The game’s first try was scored when the hosts opted for a scrum on the five-metre line following a penalty and the ball was swung out to Farries who went over. Miller hit the conversion to make it 7-3.

Momentum stuck with the Canadians and they made it count when Forteza crossed the line for their second try on 23 minutes as they tightened their grip on the first-half proceedings. A further try saw Grant receive the ball in space on the right wing and outpace the Welsh defence to touch down as Canada went into the break leading 17-3.

Ringing in the changes off the bench, Wales looked to shift momentum in their favour but Canada set up camp in Wales’ half as they looked for their next score.

Wales did well to hold them back but Canada weren’t coming away empty handed. Justine Pelletier coming off the back of a strong setpiece to score.

Miller was successful with the conversion to extend the score to 24-3.

Fresh from entering the pitch as a substitute, Pelletier marked her 10th appearance in a Canada jersey by scoring her team’s fifth try in the 66th minute. The scrum half received the ball no more than a few yards out and spun a Welsh defender to successfully go over before de Goede split the posts with the resulting conversion.