USA women's rugby head coach Kathy Flores is to step down from her position at the end of the year after eight years at the helm. 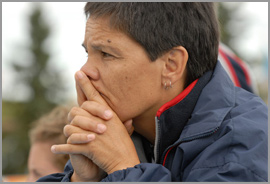 Flores was appointed in 2002 and was the only female head coach at the recent World Cup.

Flores took up the role after the USA had slumped five places at the 2002 World Cup - finishing in 7th place overall.

She was appointed based on her playing experience as a former member of the victorious 1991 World Cup squad - as well as an excellent record as a club coach, leading the Berkeley All-Blues to ten National Championships including a run of nine consecutive titles.

She received numerous accolades during her tenure, including the 2003 IRB Women's Personality of the Year, and the 2004 Women's Sports Foundation Coach of the Year.

The USA finished in 5th place at the recent World Cup - with the final match a thrilling victory over rivals Canada.

Flores said: "I've had the rare honour to not only represent my country as a player but also to have the opportunity to coach USAs elite players on the international stage. I could not have done it without the help of an experienced and competent team of assistant coaches and medical and management staff."

"My two terms as Eagles Head Coach have seen us pushing to get into the top four [teams in the world] and I have no doubt we are headed in the right direction. Like the coaches before me, I am proud to have been a part of such a tremendous and evolving program and look forward to staying involved as the USA Women work to be the best in the world.

While stepping down as Head Coach, Flores will continue to contribute her skills and experience to USA Rugby by supporting athlete identification and development programmes throughout the Women's High Performance Pathway.

"Kathy has been a great servant of USA Rugby, both as a player and a coach," says Nigel Melville, USA Rugby CEO and President of Rugby Operations. She has been responsible for many of the significant developments in womens rugby in the US and has developed top-level international players.