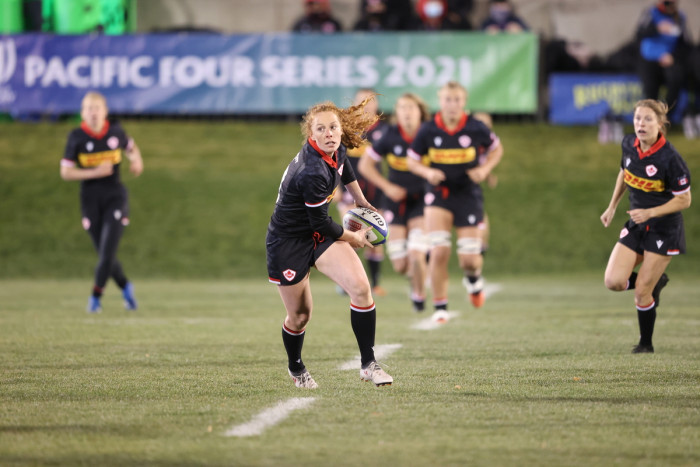 Rugby Canada’s Senior Women’s 15s team took to the field against USA Rugby at Infinity Park in Glendale, Colorado, earning a 15-9 win in the first of two Pacific Four Series matches that will take place this week.

Making her Senior 15s debut, Renee Gonzalez opened scoring in the 18th minute, finishing a quick move up the right wing to put her side up 5-0 over the Eagles, before the home side answered back with a successful penalty goal from Megan Foster to cut the lead to 5-3.

Karen Paquin added to the Canadian lead with halftime looming, converting a try after a lengthy defensive stand from the United States. MasterCard Player of the Match Sophie de Goede—an early substitute for an injured Janna Slevinsky—converted successfully to give Canada  a 12-3 advantage heading into the break.

Foster struck twice on penalty kicks in the second half’s opening 20 minutes to cut the Canadian lead to 12-9, but an Eagle penalty and second successful penalty from de Goede maintained Canada’s six point lead at 15-9.

A pair of inspired Eagles drives at the line with under 10 minutes remaining would fall short, with Canada’s defense ensuring they maintained their 15-9 lead through to the final whistle.

In addition to Gonzalez, Sarah-Maude Lachance and Nakisa Levale also made their senior debuts for Canada, while veterans Alex Tessier, DaLeaka Menin, Emily Belchos de Goede and first half scorer Paquin all captured the 30th caps of their careers. Brittany Kassil also made her 20th senior appearance for Canada in the match.

Canada and the United States will face each other in a rematch on Friday, November 5 at Infinity Park in Glendale.