Ferns too strong for Canada

Canada opened its International Women’s Rugby Series campaign with a 28-16 defeat to New Zealand at Westpac Stadium in Wellington. 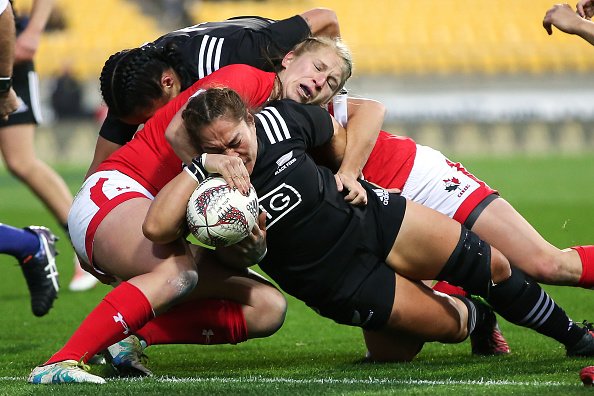 Report: NZRU. While they didn’t have it all their own way, the Black Ferns fast defence, courageous work at the breakdown and finishing ability proved too much for a Canada side that battled hard throughout the 80 minutes.

Canada came to play in Wellington and tested the Black Ferns with their strong offloading game and solid scrum. But it was the Black Ferns who struck early through captain Fiao’o Faamausili. The Black Ferns made Canada pay for a penalty inside their ’22 by opting for a lineout and making no mistake with the drive.

While the first try was straight from the text book, the second was down to a piece of individual magic from full back Selica Winiata. The electric fullback picked up the ball in broken play and chipped ahead to regather and score to make the lead 14-0.

But that was to be it in the second half as Canada closed out the half the stronger. With their offloading game and quick ball movement causing the Black Ferns defence problems, Canada finally crossed when powerful loose forward Jacey Grusnick got on the end of an overlap.
Canada continued to play the game at pace, and the Black Ferns racked up a number of infringements at the breakdown before Pip Love was yellow carded on the stroke of halftime. Canada sharpshooter Magali Harvey slotted the penalty to make it 14-8 at the break.

Despite being a player down, the Black Ferns crossed for an early try when halfback Kendra Cocksedge dived over following a steady forward build up. The halfback had been impressive all night and capped off a superb performance with a stunning solo try to stretch the Black Ferns lead to 28-11.

Just like they did in the first half, Canada closed out the half stronger and scored on the stroke of fulltime to make the final score 28-16. Canada’s ball continuity was impressive throughout but the Black Ferns foiled a number of scoring opportunities through their desperate scrambling defence.

Player of the match Kendra Cocksedge said: “We wanted to target that 10 channel and its where we ended up getting a couple of tries, then we it was also good to get it out wide with a couple of wide tries too.”