Wins for the Netherlands and Spain in the opening of the European Championship were not unexpected – but the size of the wins were. 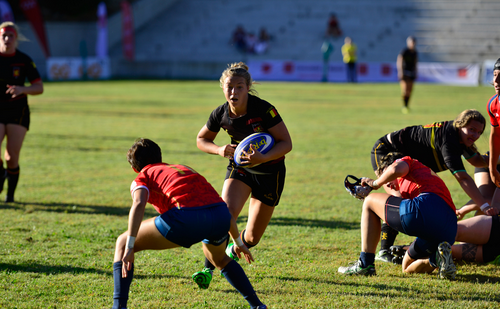 The two teams met in the first round of the 2014, where the Dutch won by 39-0.  In yesterday’s opening test of the European Championship the Dutch almost equalled this score by half-time.

Marit Bakker opened the scoring after just two minutes, bursting through a gap in the Swiss line to touch down under the posts. Within 25 minutes she had completed a hat-trick, and with tries from Loraine Laros and Inge Visser the Dutch were 31-0 up at halftime.

Dutch power and speed was the difference. The Swiss had plenty of possession, and spent periods inside the Dutch 22, but rarely found any gaps in the Dutch line, while strength and experience of the Dutch pack – as two years ago – allowed them to turnover the Swiss time and again.

With victory assured the Dutch began to use their bench to rest key players from as early as the 30th minute – but three more tries from Asia Udding, Sanne Klein and Marsha Volker in the second half kept the scoreboard moving.

These two teams had also only met once before, in this case back in 2010 when Spain won 66-0 in Metz. But Belgian rugby has moved on since then and a far closer game was expected. Which only goes to show how wrong experts can ben.

At times in the first half, Spain played like Fijians. In perfect conditions for fast slowing rugby, the Spanish were fast and the ball flowed from hand to hand. When their World Series backs took command it was at times pure sevens rugby, with Belgium chasing shadows.

Barbara Pla opening the scoring in the second minute, before Patricia Garcia added two more before the tenth minute – her first try in the fifth minute being particularly memorable (watch the match video from around 4:30). The scoreboard was running well ahead of the clock, and continued to do so throughout the first half.

To their credit the Belgians did not crumble and defended well for the next 10 minutes, but more scores were inevitable. Isabel Rico finally found a gap following a lineout on 21 minutes, after which Vanesa RIal and Marina Bravo followed before the half-hour. Iera Echebarria added a seventh try on 34 minutes before Patricia Garcia completed her hat-trick on the stroke of half-time, with the score at 56-0.

Mass replacements slowed down the scoring in the second half, but allowed Amaia Erbina, Isabel Macias and Irene Schiavon to come off the bench and add four more tries (Erbina scoring two), giving a final score of 76-0.