Experience the difference between Scotland and Japan

Scotland ran out comfortable 36-12 winners against Japan this evening, but may have as much to think about as their Japanese opponents 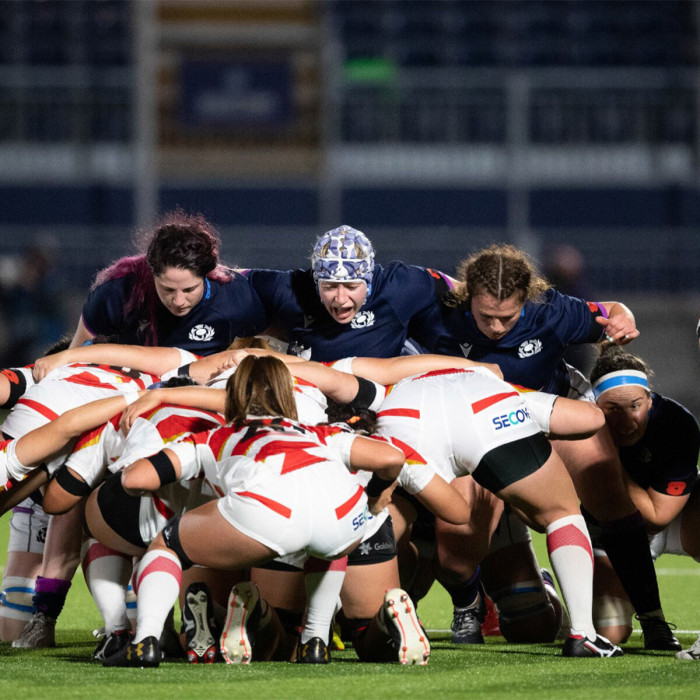 But behind the win there will be areas of concern, because for 60 minutes Japan played with just 14 players – losing their lock, Yuna Sato, after barely 20 minutes , red carded for a high tackle. And they were lucky to not lose another player shortly after when a second high tackle was fortunate not to make contact with the head. Neither incident was intentional – it was speed of international rugby making Japanese defenders make mistakes – mistakes that could be very costly at the World Cup

Yet despite having a massive advantage this gave them up front, Scotland seemed to lose concentration for most of the rest of the half, going from 10-0 ahead shortly after the red card to being behind 10-12 t the break.

An enthusiastic crowd of 2,346 welcomed Scotland to a new home at the DAM Health Studios stadium in Edinburgh, after several years at Scotstoun

Scotland began well, opening the scoring in the 12th minute after their pack had made inroads into the Japanese defence . Quick recycling by Helen Nelson was key as Lisa Thomson and Hannah Smith supported to send in Rhona Lloyd for the try, and Scotland lead 5-0.

Shortly afterwards Yuna Sato was dismissed, and Scotland took full advantage, a scrum penalty enabling Thomson to find touch five metres out and from the resulting maul Lana Skeldon got the ball down. 10-0 after 23 mins and it looked like the floodgates were about to open.

But they didn’t. Instead it was Japan who seized the initiative as Scotland seemed to lose concentration. An unnecessary penalty conceded by Megan Gaffney gave Japan their first sustained foothold in the Scotland 22. Initially flanker Irocha Nagata was held up, but the referee was playing an advantage. Japan attacked again and hooker Nijiho Nagata powered over.

Immediately Japan returned to the Scotland end and flanker Seina Saito looked certain to score after a series of Scots' errors, before her own inexperience meant that instead of diving for the line she slowed and knelt to score, only for Lloyd and Rachel McLachlan to hold her up.

But almost immediately after, Sachiko Kato ended a series of pick and goes with a quickly taken tap penalty, the conversion gave Japan the halftime lead

Whatever went on in the dressing room it geed Scotland up for the start of the second half and they were ahead within three minutes.

A patient build-up continued and after useful carries from Konkel and Wassell, Skeldon and Rollie handled for Gaffney to gather and cross for Scotland’s third try and to regain a lead that they would not relinquish - Scotland were ahead 17-12

Scotland took a firm grip on the game three minutes later when Nelson’s boot upfield was pursued at pace by Lloyd. Scotland won possession, Konkel thundered on and then ball was transferred sweetly via Nelson, Thomson and Smith for Rollie to cut through. Scotland lead 24-12.

The benches now came into play and before after 62 minutes Scotland scored their fifth try quarter as Nelson released Thomson who blazed a line to score.

Japan’s fitness allowed them to have most of the possession for the final quarter and Scotland’s final try came from a counter-attack started by Rollie. A crossfield kick from Sarah Law was hacked on by Lloyd who won the footrace to the line for the game’s final score.