An exciting taste of the future

The headline tonight was Sarah Hunter's 100th cap, but with nearly four years to go to the next World Cup, this Old Mutual Autumn series between England and Canada is about the next generation of young players. Based on what we have seen so far we have an exciting few years ahead. 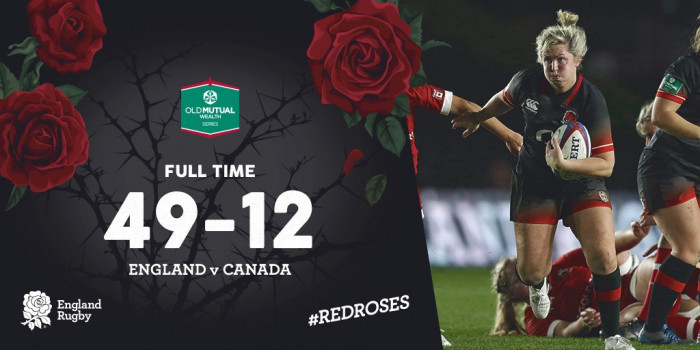 Canada were well beaten in the first test going down to their biggest ever defeat to England barely two days after getting off the plane. With the benefit of that experience and the luxury of three days to prepare for this game, Canada put in a much-improved performance that makes the final test at Twickenham on Saturday all the more interesting.

However, things did not start well for Canada with England taking just two minutes to get on the board. A 5m lineout, lead to the maul that Canada had no answer to on Friday. Again, Canada could do nothing to stop the England pack and Heather Kerr got the touch. 5-0.

But the floodgates did not open this time. Canada were playing a different game. Their lack of a kicking option meant that they were still running the ball on every occasion, but there was more speed and some noticeably improved handling which backed up the advantage they already had at the set-piece.

Defensively they had also improved. The tackles were lower, and the line speed faster with greater width. England’s wings were not being given the acres of open space they had in the first game.

England’s set pieces were also misfiring. After 10 minutes another 5m lineout looked like being a carbon copy of the first try – but the chance was missed as Canada stole the ball.

After 20 minutes England turned to goal kicking to get the scoreboard moving, Amber Reed on target with a penalty – 8-0.

Despite their improvements, especially in ball retention, Canada were gaining little ground. They went through ten phases on halfway but ended 5m behind their starting point. England were patient, turned over and burst through the Canadian line. Some great handling, a perfect kick by McLean, and Rachel Burford was in under the posts, 15-0.

Amy Cokayne was on great form, and an interception almost got her over the line as halftime approached, but England’s third try was to come from fullback Ellie Kildunne whose dancing feet were behind the try of the game, putting England into the break 20-0 ahead.

Canada faded badly in the second half of the opening test, and though England had much the better of the third quarter they were unable to run away with the game this time. Even so more of their rising stars managed to get onto the scoreboard, including Hannah Botterman and Jo Brown. A second try from Kildunne and England were 49-0 up with the last quarter looming for Canada.

But the end of the game really belonged to the Canadians. Finally their pack got a chance to shine near the England line, and twice they took advantage with tries from Janna Slevinsky and McKinley Hunt wrapping up the game on a positive note for the team in red. 49-12 was the final score.

In the end, a second comfortable win for England – but there was plenty to suggest that the teams are far closer together than the scores suggest. Given more experience – and above all a decent boot capable of reliably clearing their lines – and the outcome would be far closer. England have a clear advantage at the moment, but the more opportunities Canada get to play rugby at this level the closer things will be come 2021.