England have won the International Series in New Zealand after an impressive 29-21 win over their biggest rivals, New Zealand, to record their first win in New Zealand for 16 years. Canada were far too strong for Australia and finished third. 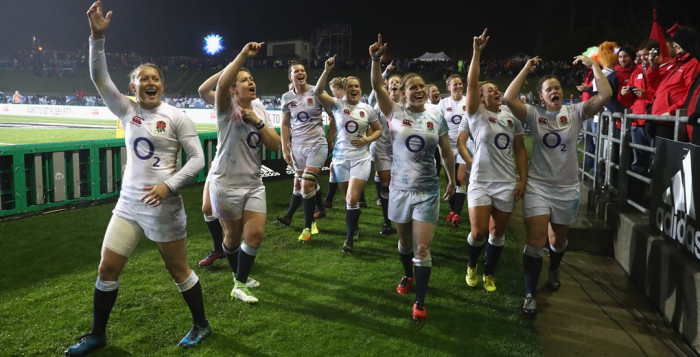 (Report: Rugby Canada). Despite carrying three injuries into the game, Canada beat Australia 45-5 in their final match of the International Women’s Rugby Series in Rotorua, New Zealand, the Canadians outscoring the Australians seven tries to one, with scores from Julianne Zussman (2), Jane Kirby, Frederique Rajotte, Emily Belchos, Brianna Miller and Kelly Russell while Queensland's Hilisha Samoa scored Australia’s only try at the beginning of the second half.

“We wanted to play with a bit more tempo than we’ve been playing with,” captain Kelly Russell said. “You have to learn from previous losses and that’s what we did. This game was a start and we’re keep building ahead of the World Cup.”

Canada came storming out of the gates and in the seventh minute Australia were reduced to 14 men for 10 minutes as Cheyenne Campbell was sent to the sin bin and Canada took advantage as Kirby powered over for a 7-0 lead. The lead was soon doubled as Canada forced a turnover on defence, Magali Harvey sprinting away before finding Zussman who strolled in. Rajotte extended Canada’s lead to 19-0 in the 23rd minute before Belchos barged her way over the try line for a 26-0 lead at half time.

After Australia got on the scoreboard, Miller grabbed her first test try as she slithered through a hole to push Canada’s lead to 33-5. Canada got late tries through captain Russell as well as Zussman to secure a convincing 45-5 victory.

Friday’s game was the final warm-up match for Canada  before the 2017 Women’s Rugby World Cup.Despite the defeat, the match was an important opportunity for many players to stake their claim for World Cup selection, with nine changes having been made to the Wallaroos line-up after the recent match against New Zealand.

Wallaroos head coach Paul Verrell said: “While we were disappointed with the result today, the tour has provided us a chance for the squad to get a realistic view of the work ahead of them before we head to the World Cup in Ireland. We’ve uncovered some talented new players across the three matches with 11 new players earning their first caps. The focus now is to ensure we continue to build in the six week block we have to prepare for the World Cup. The girls will be working hard in their respective states before we come together at our final pre-World Cup training camp at Narrabeen in Sydney in August.”

An early injury to Number 8 Victoria Latu and a yellow card to captain Cheyenne Campbell put the Wallaroos hopes under duress in the opening minutes.

(Report: NZRU & RFU). Making use of their powerful pack, especially at lineouts, England claimed a 29–21 win over the Black Ferns to claim the International Women's Rugby Series at Rotorua's International Stadium on Saturday.

The defending women's world champions wanted to make a statement during the New Zealand tournament ahead of the World Cup later in the year and they left the Black Ferns camp with plenty to think about ahead of that tournament.

It was only England's second win in New Zealand - their first was in 2001. It was also a turnaround in results for England having played the Black Ferns in the Old Mutual Wealth Series in 2016, where New Zealand beat Simon Middleton’s team 20-25 at Twickenham Stoop.

England's presence of mind in their lineout drives was seen when New Zealand didn't contest lineouts, nor challenged the maul. It is a common tactic of coach Glenn Moore, but if the ball was not transferred none of the England players were off-side and twice they marched New Zealand back, the second time resulting an a penalty kick to the corner and a lineout move which produced a try for Marlie Packer to put England out to a 24-14 lead with 27 minutes left.

England Coach Simon Middleton had made seven changes to the England team that lined up against Canada, with the starting XV totalling an impressive 850 caps, and the world champions made a superb start.

Right wing Lydia Thomson made a strong run down her flank before linking back outside to set up a ruck which opened up space on the left for centre Emily Scarratt to score the try after 1min 58sec.

New Zealand took time to get their hands on the ball but once they did they built momentum through the pack and when hooker Fiao'o Fa'amausili took the ball up the centre it created some continuity play with lock Charmaine Smith taking a strong tackle before the ball was released for second five-eighths Chelsea Alley to make two strong runs.

Then Fa'amausili was in the action again to slip the ball to halfback Kendra Cocksedge who raced around the ruck, chipped ahead and then won the race to the goal-line to open New Zealand's scoring after nearly nine minutes.

Both sides continued to provide chances without being able to finish them off. Scarratt made a break in the 19th minute and attempted a pass in the tackle only to see Black Ferns wing Portia Woodman leap to intercept the pass and clear out on a 60m run to the line.

However, the English forwards, led by flankers Marlie Packer and Alex Matthews, put pressure on the Black Ferns defence which was already struggling with its lineout work. Also contributing was fullback Danielle Waterman with some incisive running into the backline.

It didn't help that in the midst of a long-range England lineout drive, Fa'amausili was sin-binned for bringing the maul down just out from New Zealand's line. Given another chance at the maul, England rolled New Zealand back and it was lock Abbie Scott who went over for what was the score-levelling try.

England now had the momentum and they made a quick start after the break, dominating possession and territory.

After a sustained period of England pressure, a powerful break from Bristol flanker Packer had the New Zealand defence scrambling. Fly-half Katy Mclean got her hands on the quick ball and attacked the blindside, where she found Thompson in space.

The Worcester Valkyries winger, who scored a hat-trick on her international debut, still had plenty to do but a mixture of trickery and power saw her score in the corner.

It got even better for the Red Roses as a well-worked set piece saw Packer force her way over from close range following a clever line-out.

The English pack was now dominating the New Zealand team and it was just a matter of time before they exerted their physical power again.

Scott claimed the line-out and offloaded to Packer, who with a little help from her friends, drove over from close range but again Scarratt was unable to add the extras to leave the score at 24-14.

In worsening conditions, New Zealand were forced to run the ball from deep as they desperately tried to get a foothold back in the game but England’s defence was disciplined, with Thompson marshalling the impressive Woodman well out wide.

England were dominating possession and forcing New Zealand into uncharacteristic errors, however Scarratt was unable to edge the Red Rose further in front from the kicking tee, pulling her penalty wide on the hour mark.

England did go further ahead on 68 minutes as New Zealand once again struggled to halt a close-range driving maul from the visitors.

The Red Rose power up front and set piece was now dictating play and this time it was replacement Fleetwood who burrowed her way over the line.

Victoria Subritzky-Nafatali scored a late consolation try for New Zealand, powerfully barging her way over after the home team had been camped on England’s line late in the game.

Middleton paid tribute to his side's character and tactical nous following the victory.

“We’ve got some great kickers of the ball and a lot of energy on the field and that came good for us tonight.

“We’ve got a picture of where we are now. With analysis we can look at what we have to improve on but we needed to give everything tonight against the best side in the world and we’ve done that and so are rightfully very happy and very proud.”