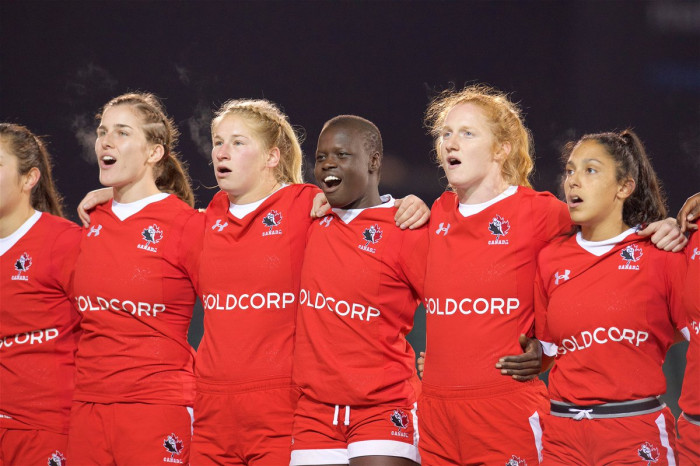 England were far too good for an inexperienced Canada outfit, winning 79-5 in London in the first of three Autumn tests.

Out-capping Canada with 834 caps to 162, England used all of their experience to expose Canada’s naivety in the wide channels and the hosts were simply too slick and too accurate throughout.

Newcomer Jess Breach grabbed the headlines with an eye catching six tries with the Harlequins flier turning in a dream debut, but while her finishes were superb, Canada’s naive defence was too easily caught out and it wasn't until a score on the 61st minute that the crowd saw anything cohesive in attack from the visitors.

England scored after just six minutes when Breach raced through to give a taste of what was to come.

England scored again after 19 minutes when a great burst from the excellent Marlie Packer freed up Danielle Waterman who linked up with Amber Reed and Rachael Burford with the latter dotting down and the former converting.

Breach was over seconds later following another break from Packer and a brilliant pass from Waterman to make it 17-0 after just 22 minutes, and already it looked like a long night for the Canadians.

The one ares they did have dominance was in the scrum and Poppy Cleall was continuously forced to grab the ball on the back foot at England’s put in.

Canada couldn't handle Breach in any sort of space and she was over for her third before long, while her opposite winger Abigail Dow got in on the act before half-time after another great pass from Katy Daley-Mclean. That try must have frustrated Canada’s coaching team particularly given it came from a poor turnover despite a brilliant few carries from Cindy Nelles into the England 22 and it meant that England lead 29-0 at the break.

It was more of the same on the turnaround when Breach sprinted over for her fourth following a simple scrum play and Amy Cokayne went over minutes later.

Breach cantered over again with a fine finish out wide before Packer added a score from a well worked driving maul.

On the hour mark, finally Canada scored through Nelles, who crashed over following some good patient play up front - the score some reward for the the number 8 who played well.

But order was restored when Dow was over again just a minute later and Breach added another, with Rocky Clark and Ellie Kildunne adding more scores off the bench.