England too strong for improved Ireland

Ireland turns in a much-improved display but England prove too strong for a match that attracted 6,667 for a 5.30 Friday evening kick-off. Although the first game of a double header, this is comfortably a new home record for an England international (outside a World Cup). 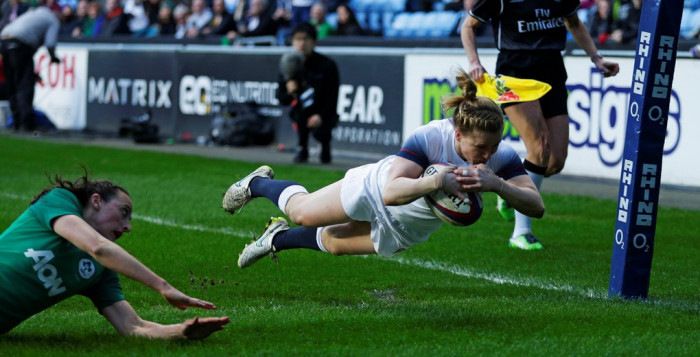 England ran out deserved five-try winners but they were flattered by the 33-11 verdict, a much-improved performance from Adam Griggs' side - five days on from a disappointing home defeat to Scotland - seeing them test the world's number two-ranked team throughout.

The hosts led 19-6 at the interval with a try from a grubber kick and two more from lineout mauls, while Ireland, who defended stoutly despite those concessions, had penalties from Hannah Tyrrell and Niamh Briggs.

Tries from player-of-the-match Ellie Kildunne and Amber Reed, either side of the hour mark, sealed the bonus point and the result for England, who finished second to Grand Slam winners France, before Ireland gave them a taste of their own medicine with a closing 71st-minute maul try from Claire Molloy - her third score of the Championship.

Third-placed Ireland were able to disrupt England early on at the Ricoh Arena, the efforts of captain Ciara Griffin and Briggs at the breakdown setting up a steal from Aoife McDermott and a subsequent penalty.

However, the visitors gave away a soft try on the 10-minute mark. A second stray lineout from Leah Lyons allowed England to press, and Katy Daley-Mclean's grubber kick evaded Tyrrell and was grounded in the left corner by Danielle Waterman.

Ireland were almost level on the quarter hour mark, Daley-Mclean's loose pass being seized upon by Nicole Cronin who scampered up the left wing but Kelly Smith was able to haul her down.

Strong carries from the excellent Cliodhna Moloney, Paula Fitzpatrick and Lindsay Peat - off a five-metre lineout - had the girls in green within reach of the try-line, only for England to disrupt and force a relieving penalty.

Nonetheless, some textbook work at the breakdown from Molloy won a kickable penalty in response, and with Briggs off for a head injury assessment, full-back Tyrrell left-footed the ball through the posts for a 5-3 scoreline. Ashleigh Baxter was unfortunate not to win a ruck penalty in Ireland's 22 soon after, one of the marginal calls which Spanish referee Alhambra Nievas gave to the home side.

You could argue that England's lineout throw was not straight in the lead up to their second try, but it was a self-inflicted wound from Ireland as McDermott was offside from a kick in the build-up. A long and well-executed 28th-minute maul saw flanker Marlie Packer finish with Daley-Mclean convert, although replays showed that England could have been penalised as Rowena Burnfield was the last player in the maul and did not have the ball in her hands.

England got joy from the maul again just a few minutes later, Ireland electing not to defend it initially with Griffin attempting to come in around for a sack, but the drive built enough momentum and hooker Amy Cokayne touched down for Daley-Mclean to make it 19-3.

Tireless hooker Moloney clawed back three points by getting over a ruck ball in impressively quick fashion. The returning Briggs split the posts with the resulting 33rd-minute kick, which proved to be the last score of the fiercely-contested first half.

England did set up another maul opportunity just before the break, with Nievas again frustrating Ireland as she got in the way of a Cronin pass and then ruled that a Briggs knock-on off her shoulder was a penalty. However, justice was served when Ireland successfully defended the maul with Moloney and Molloy again to the fore.

Ireland's dogged defence stood up to an early English onslaught on the resumption, as the hosts were pressurised into accidental offside at a maul, a knock-on wide on the right wing and then a forward pass in the Irish 22.

As the third quarter wore on, Ireland's physicality at the breakdown and in contact was knocking England backwards, with second row Fitzpatrick leading the charge and a couple of big kicks from Briggs gaining good yardage.

Ireland's inaccuracy with ball in hand was hurting them with a number of dropped balls, and England carried the greater threat out wide. Delighting the majority of the 6,667-strong crowd, their teenage full-back Kildunne took advantage of a missed tackle from Megan Williams to cross the whitewash in the 57th minute.

Daley-Mclean converted the bonus point score and Ireland lost crucial ground a few phases later, referee Nievas adjudging that Molloy had not been obstructed in defence and an England penalty followed for a high tackle, launching the 2017 World Cup runners-up forward again.

Ireland were caught for numbers on the right as England put the ball through the hands and replacement Reed was able to gallop through a gap and score close to the posts. Daley-Mclean landed her fourth successful kick for a 27-point margin.

The best of Ireland's attack was seen the final quarter of an hour, though, as Griggs' charges began to find gaps in the English defence. Tyrrell's neat set-up released Louise Galvin up the left wing but a subsequent knock-on by Williams summed up Ireland's day.

Their accuracy was bang on with 10 minutes remaining when the increasingly-influential Katie Fitzhenry flew into the English 22. With the bench providing a good impact, a penalty for a high tackle set up a lineout opportunity and Molloy, having taken down Laura Feely's throw, regathered the ball at the tail of the maul and was driven over for a hard-earned try.

Tyrrell was unable to convert from wide out on the left, and despite a sparkling break by replacement Ailsa Hughes straight from a ruck, which got Ireland on the front foot again, a scrappy finish from both sides meant there were no further scores.