A sixty-point second half by England overwhelmed the United States, the fifth best team in the world falling to their worst ever defeat. 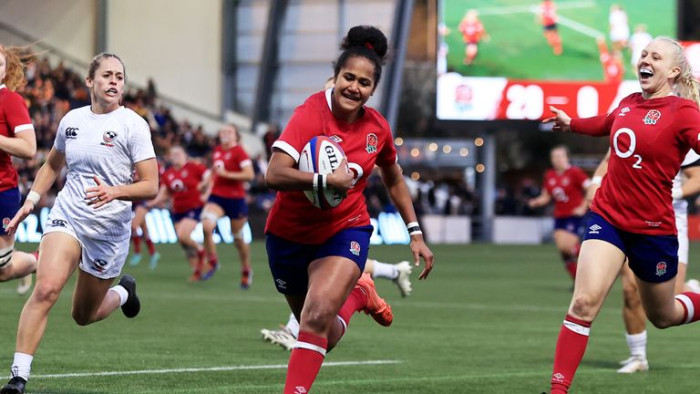 England ended their Autumn campaign with a performance that asks severe questions for the rest of the world.

The United States are the world’s fifth ranked team and expected to be competing for a World Cup next year, yet England blew them away with an 89-0 win, equalling their second largest ever victory, and giving the USA their worst ever defeat.

It was a 15-try win that gave England their 18th win in a row. Based on this year’s performances, only France can now live with the Red Roses.

The result means England have scored 239 points across four games this Autumn and conceded 39.

Victory never looked in doubt, but England were not error free. Several chances went begging in the first half, which nonetheless ended with England 29-0 ahead.

Vickii Cornborough began proceedings by scoring after within 40 seconds of the start, and Abby Dow soon added a second, her explosive attack shrugging off four defenders and covering half the pitch to cross in the fifth minute.

England did not stop for the whole 80 minutes and soon it was Lydia Thompson marking her 50th cap by scoring at her club's home ground.

For a while the United States managed to sustain a period of pressure, but as soon as England got the ball, they scored again, Lark Davies going over in a maul before Leanne Infante dove across the tryline from the base of a ruck.

If the first half had seem the USA on the backfoot, the second half blew them out of the park

Lagi Tuima's scored after just 42 seconds of play, Zoe Aldcroft nipped through a gap for an opportunistic score, Rowland went over herself after scooping up a loose ball and front row before replacements Sarah Bern and Hannah Botterman blew more holes in the United States' defence, creating space for Heather Cowell to score.

Bern scored too, Davies and Thompson claimed a second each and Connie Powell capped her debut with a try.

Holly Aitchison made sure she got her name on the scoresheet, becoming the 12th try scorer of the day, before Bern grabbed another with the clock in red to round off England's biggest win of the autumn before Abby Dow scored again