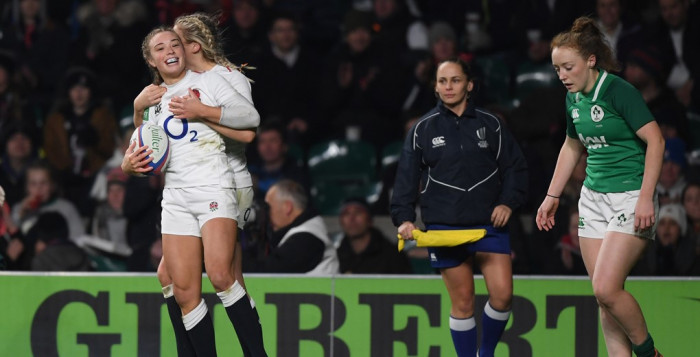 In a match played in front of an estimated crowd of more than 10,000 spectators - either staying on after the earlier men's match or taking advantage of free entry - England coach Simon Middleton made six changes.

Heather Kerr got England on their way after seven minutes, dotting down from a driving maul with further scores from Kelly Smith, after a smart offload from Tatyana Heard, and another forward effort from a maul saw Vickii Cornbrough go over. Three-try Thompson was one of those to be reintroduced, having been rested from the side that beat Canada 27-19 last weekend.

But it was Kerr, making a first start of the series at hooker, who opened the scoring by dotting down after a driven English maul.

Wing Smith extended the lead when she raced away after Tatyana Heard's break and England had two further tries ruled out by the TMO by the time of their third, from Cornborough, which was also the product of a driven maul.

In truth, the home side had looked good value for a 15-point advantage at the break, but Considine and Delany finished clinical attacks by the visitors to frustrate England.

Lydia Thompson latched onto Zoe Harrison's superbly weighted grubber for the first points of the second half and then she showed her class to break a tackle and race in from inside her own half for a second score. Some Irish pressure on England's line eventually saw Claire Molloy score but Thompson completed her 18-minute hat-trick when she plunged over late on, while replacement Catherine O'Donnell's try on the stroke of full-time was converted by Katy Daley-McLean to make victory look more comfortable.

England head coach Simon Middleton: “It would be easy to say the game was a bit frustrating as it was very stop-start and you wanted it to get going, but our performance wasn’t.

“I think the biggest difference for us was Marlie Packer coming on at half-time, Marlie was absolutely outstanding when she came on. Then Katy [Daley-Mclean] and Rachel [Burford] injected pace into the game with their passing and decision making, and that opened the game for us.

“Lydia [Thompson] is phenomenal. Her game is finishing and I think with Portia Woodman they’re the two best finishers in world rugby. Her chances were half chances and she took them.

“I’m chuffed to bits with the way the squad has come together obviously on the field first and foremost,  but off the field as well and it will be one of those where we’ll learn more when we reflect on it."