England ease past Ireland in Leicester

In front of their biggest ever standalone home crowd in the women's Six Nations, England were miles too good for an Irish side which offered early resistance but could do little to halt the home team's winning run. 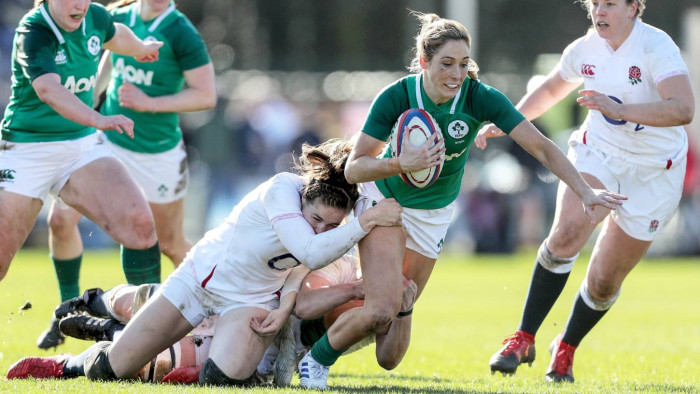 Much had been said in advance of this game about the missing Irish players who were instead focusing on sevens.

With the bones of the Irish backline removed, and with one of their best players Sam Monaghan missing through injury, for the first half at least, Ireland played as if they had something to prove to all those who had written them off.

Ultimately though England were just too strong, too fit and too experienced as they scored 59 unanswered points in the second half to ensure they head to France searching for a grand slam finish next weekend.

England scored almost immediately when a brilliant rolling maul ended in a try for Lark Davies after just a couple of minutes and though it took another quarter of an hour for their second score, through the impressive Sarah Bern, things did look ominous early on for the visitors.

But Ireland showed real grit, frustrating England at the breakdown, where Edel McMahon and Neve Jones were outstanding and where they just about held their own around the park.

England had a raft more chances to score but failed to take advantage of a few wide-open opportunities – one effort from Abbie Ward was ruled out for a forward pass and then another near score was deemed held up over the line.

Ireland had a chance at the posts to get on the scoreboard, but Nicole Cronin missed a simple enough effort, but they continued to frustrate England through the half, with excellent linespeed in defence and continuing turnovers.

Leanne Infante was then remarkably lucky to stay on the field when she appeared to clearly strike Michelle Claffey in the face but was only given a warning, and the score stayed at 10-0 all the way to half time.

It was always likely that this professional England team would power away in the second half and so it proved to be.

Packer, who was outstanding again, finished brilliantly out wide almost off the kick off, brushing off a handful of Irish defenders on her way to the try line, and then when Dorothy Wall was yellow carded for a high tackle, England got their maul going again and Davies grabbed her second try.

Helena Rowland came more and more into the game for England at fullback, proving a tricky and evasive runner and her interplay helped Lydia Thompson to a try out wide.

The tries were raining down now on a sun-drenched Welford Road and Poppy Cleall and Hannah Botterman both then score off the bench.  Cleall grabbed another before going off injured and then Ellie Kildunne showed superb footwork and pace to score out wide.

Ireland then went down to 14 players as Sene Naoupu was red carded for a high hit and then Kildunne and Thompson added their second tries as Natasha Hunt's pace and energy meant Ireland were struggling to contain any England attacks.

In the end the scoreline comprehensive, outlining the current gulf between these two teams, and reminding everyone that when professionals play amateurs there is only ever going to be one result.