Ireland lost 19-10 to a physical United States side in a fiercely-contested November Test at Energia Park (aka Donnybrook) this afternoon, the Eagles first test win since the World Cup 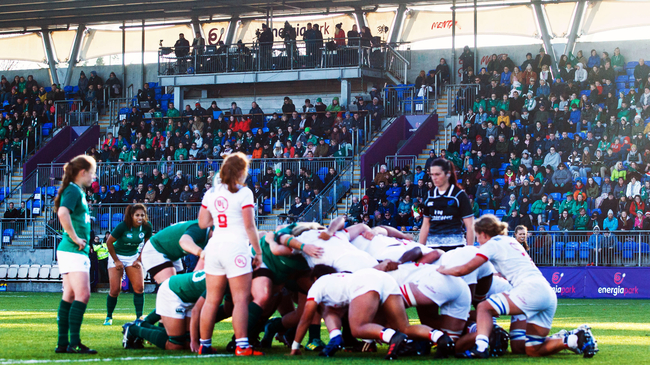 Despite tries in each half from wingers Laura Sheehan, who ran in a fine effort on her international debut, and Eimear Considine, Adam Griggs' charges were second best against an Eagles outfit that showed the benefits of recent outings against New Zealand and England.

The United States team brought significant pressure on the Irish, remaining patient and identifying pockets of space to run away with three well-earned tries. Ireland was held to one unconverted try for the duration of the game until an attack in the final moments allowed them to score a one last time.

Stepping up for their first international since the end of last season's Six Nations, Ireland were quick out of the blocks as they looked to establish some early territory. Second row Aoife McDermott called the lineouts for the first time and provided her side with a formidable set piece option.

As Ireland edged closer to the right corner from a penalty, powerful carrier Lindsay Peat almost made the breakthrough. Another penalty set up a maul opportunity but the USA managed to steal the ball and draw clear of their own try-line.

The difference between the sides was the US's clinical edge when in sight of the whitewash. A surging run up the right wing from Jennine Duncan brought them into the Irish 22, with the returning Considine getting across from the opposite wing to make a crucial tackle.

Even so penalties and a collection of phases allowed play to continue for several minutes until the Women's Eagles employed skillful set piece play to draw first blood.

However, a subsequent penalty saw scrum half Carly Waters go from a tap and captain Kate Zackary spun in a tackle to offload for supporting centre Rozier to dive in just to the right of the posts. She converted her 13th-minute try for a 7-0 lead.

Considine almost replied five minutes later but out-half Nikki Caughey was adjudged to have knocked forward prior to releasing the Clare native. Despite some early promise, and the backing of another vocal home crowd in Donnybrook, Ireland struggled to create sustained pressure in attack.

The Americans' athleticism and impact at the breakdown and in contact saw them grow in confidence, particularly with strong-running number 8 Jordan Gray-Matyas on the prowl. Ireland captain Ciara Griffin was equally effective with a clutch of important turnovers.

Even so it wasn't until Captain Kate Zackary earned significant ground that the U.S. side drove themselves within touching distance of another score.

In attack within meters of the end zone, Carly Waters pushed and pushed but couldn't get the ball over. With the tact to make a quick decision, Waters induced a series of offloads that swiftly got the ball to the right wing for Kaitlyn Broughton to dot down, 12-0.

A timely five-pointer lifted Ireland before half-time, closing the gap to 12-5 in the process. Turnover ball was shifted wide through the hands of Hughes, Claire Molloy and Claffey who released the fleet-footed Sheehan to evade Duncan from 40 metres out and ground the ball wide on the left.

The winger's excellent 38th-minute try went unconverted, with Caughey's conversion attempt just dropping short. The momentum appeared to be swinging in Ireland's favour but, on the resumption, the USA once again proved a tough nut to crack.

They made the greater attacking inroads in the third quarter, with the notably exception of a Sheehan break out of defence. Nicole Cronin was introduced at scrum half, cleverly winning a penalty at a ruck as the Irish defence came under further pressure.

Well into play, Jennine Duncan broke the line but the United States was penalized near the 5-metre mark and conceded a scrum to Ireland. A penalty and Irish lineout later, the opposition intercepted a United States offload and ran past the gain line to claim too much territory.

The moment was short lived, however, as both teams entered a chapter of play that saw set piece after set piece keep the action at Ireland's 22. It wasn't until several minutes later -- when the United States found themselves back in their own territory -- that Meya Bizer would turn the tables for good.

Winning a scrum on her own side, Bizer broke open and darted across the pitch for a huge run that took the Eagles back to the Irish 22. Though they had been there before, the line break brought a new energy to the fight as the United States pushed for every inch to give Bizer a short pass for the score.

Rozier added a terrific conversion from the touchline for a 19-5 scoreline, leaving Ireland with it all to do. Griggs sent on Portlaoise youngster Emma Hooban for her first cap at hooker, alongside Harlequins recruit Leah Lyons, and Ballinasloe starlet Beibhinn Parsons slotted in on the right wing.

That took the number of Ireland debuts on the day to four with Parsons, at the tender age of 16 years and 353 days, becoming the youngest female or male Ireland senior international player. Despite having to wait until the 73rd minute for an opportunity to shine, the teenage sensation were determined to make her mark.

There was increased forward momentum from Ireland in the closing stages with Molloy standing out, although they were twice denied a pushover try by stubborn Eagles defence. Parsons charged infield from her wing to almost break their resistance, her pace beating two defenders but the gifted Ardscoil Mhuire student was held up for a five-metre scrum.

Ireland's persistence was finally rewarded past the 80-minute mark, Considine finishing well to the left of the posts after replacement Jeamie Deacon's quickly-taken penalty and a nicely delayed final pass from Claffey. Cronin's conversion attempt was off target, leaving Ireland with a nine-point reversal to review ahead of next Saturday's trip to Twickenham to face England.