Winter has arrived in Prague, but the artificial pitch at the Marketa Stadium was quickly swept clear to allow a prompt start to third test match between Czechia and Belgium, but the first to be played since 2016 and the first in the central European republic. 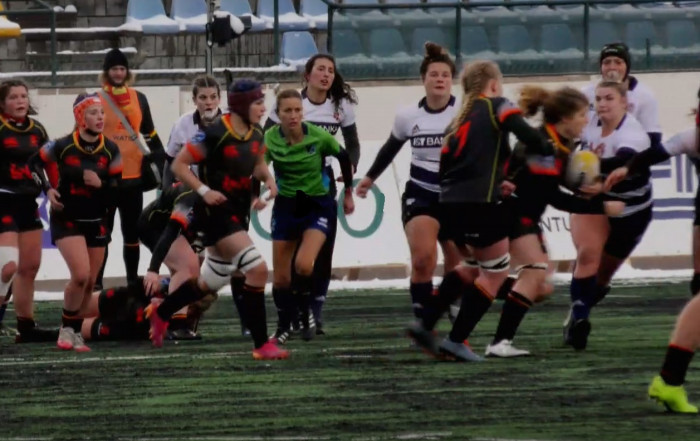 Belgium were winners of the previous two tests, but a lot has changed in six years, and the Czechs began confidently, their powerful pack helping to drive prop Alzbeta Susova over the line for for their first try after six minutes.

A few minutes later Belgium had a chance to strike back with a penalty into the corner. But the kick failed to find touch, and after a couple of phases the Czechs quickly moved to ball wide to right-wing Tereza Bathova who sprinted the length of the field for a superb try under the posts. 12-0.

The loss of second-row Dominika Holcikova did not halt the Czech and after 22 minutes a third try, captain Katerina Novakova breaking through the Belgian line to score. 19-0.

Tw minutes later and it was Bathova sprinting away again, this time down the opposite wing, and the Czechs had the bonus point and a 24-0 lead.

But the Belgians were on the scoreboard shortly before the break. A penalty 15m in front of the post took the Czechs by surprise when it was quickly tapped. In the resulting chaos the Czechs looked to have rescued the day, but the ball fell loose and Jade Cloof was first to it. 24-7, and half time.

The Belgians were straight out of the blocks for the second half, and after just three minutes Clotilde Toussaint narrowed the score, breaking the Czech line. 24-14.

But the Czechs soon bounced back, a sything run from Tereza Haffnerova setting up Sára Exnerova for her teams fifth try. 29-14

A third Belgian try from Madeleine Beriot, after they had through the phases on the Czech line, brought the score back to 29-21 with 10 minutes left.

However, the last few minutes were played out at the Belgian end, the Czechs turning down a simple penalty to try to score a sixth try. It did not come off, but there was a win celebrate a couple of minutes later.