Czech speed too much for Finns 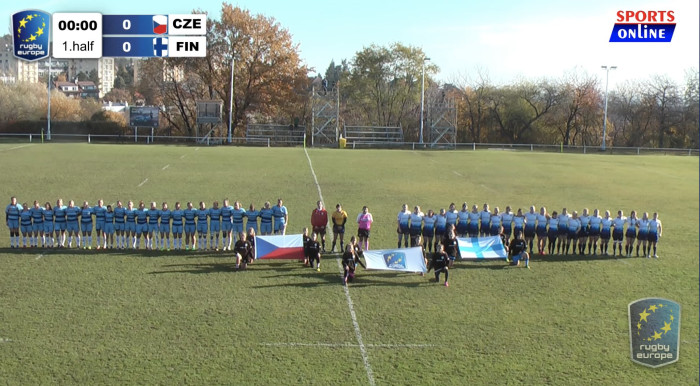 Finland kicked off and began brightly, with the Czechs struggling to cope with the power of the Finnish pack, but as soon as the Czech backs got their hands on the ball it was clear that their speed and lines were on another level. After just 6 minutes a turnover and then a superb line run by Julie Dolezilova for Czechia saw her run 70m to score the first try. 5-0.

Four minutes later it was the same again, this time Katelina Novakova exploding through the Finnish line with another 70m sprint for the try. Finland had had 90% of the possession, and had spent almost the entire opening 10 minutes in the Czech half but were 12-0 behind.

Finland spent the next ten minutes camped in the Czech half as well, but with no reward. In contrast the Czech’s first attack into the Finnish half midway through the opening period resulted in a third try, also from Dolezilova. 17-0 to the home team after 28 minutes.

Just before halftime all of the Finnish possession and territory finally got its reward when the pack finally got within the Czech 5m line and drove over. 17-5 at halftime.

Two minutes into the second half Tereza Bathova burst through a series of Finnish tackles for Czechia’s bonus point try. 24-5.

Four minutes later Dolezilova danced through the Finnish line for her hat-trick, and Czechia’s fifth try. 29-5.

Just after the hour a great battling run by Sara Lea Exnerova for Czechia was just stopped on the line, but Pavlina Cuprova was there on her shoulder for the sixth try. 34-5.

With eight minutes to go Finland go their second score, their backline getting into the action, Eeva Pohjanheimo finishing the move, running round under the posts. 34-12.

But fittingly the last score went to the Czechs, Alzbeta Susova scoring in the left corner only a minute after her try in the right corner had been disallowed for aknock-on. Final score, 39-12.