We look ahead to this weekend's Commonwealth Games. 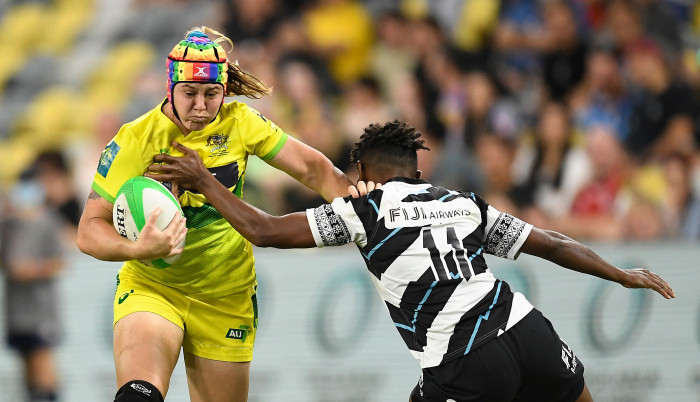 The women’s competition is an eight-team event with Australia, New Zealand and Canada qualified via the World Sevens Series, while Fiji (Oceania), Scotland (Europe) and Sri Lanka (Asia) successfully came through the regional qualifiers.

In Pool A, the Black Ferns Sevens will begin their title defence against Canada, England and Sri Lanka and Pool B, meanwhile, consists of Rio 2016 gold medallists Australia, Tokyo 2020 bronze medallists Fiji, Scotland and South Africa.

The top two teams from those pools will qualify directly to the women’s semi-finals, and will have at least a shot at a bronze medal.

Defending champions New Zealand have travelled with an experienced team. Eleven of the players named were part of the first ever gold medal winning women’s rugby sevens team on the Gold Coast four years ago.

Among the squad are Sarah Hirini, Portia Woodman, Kelly Brazier and Stacey Fluhler who also have ambitions to play in the Rugby World Cup later this year.  Jazmin Hotham will play at her first major event, having been a travelling reserve for the Tokyo Olympics, while Ruby Tui - who made her 15-a-side debut at the Pacific Four Nations recently - has been named as a non-travelling reserve.

Canada finished seventh on this year's World Series, still going through a major rebuilding stage after the departure of key players and a poor Olympic Games last year.  Piper Logan gets her first international call up, while Chloe Daniels returns to the roster after missing both the Langford and France Sevens. Having represented Canada’s Senior Women’s 15s at the Pacific Four Series in New Zealand last month, crossover athletes Pamphinette Buisa and Renee Gonzalez return to the team. Having failed to challenge on this year's World Series, a medal would be a huge boost for a squad having had a turbulent 12 months.

England make the short journey to Birmingham, fresh from news that a Great Britain team will be formed to compete on the World Series next year, making this event one of the few where they will in future get to represent their country. They go into it on the back of Europe Trophy Series wins in Budapest and Zagreb last month and their squad features three of the bronze medal winning team from the 2018 Commonwealth Games. Abbie Brown, Meg Jones and Amy Wilson Hardy, as well as four Tokyo 2020 Olympians. Brown and Jones, who makes a timely return from injury, will co-captain the group.

Asia were not represented at the first Commonwealth Games Sevens in Gold Coast four years ago, but this time around they have taken one of the two places prevously offered to Africa. Sri Lanka are the region's representative by virtue of their 5th place at last year's Asian Sevens, which followed another fifth in the region's Olympic qualifier in 2019. One of Asia's most active nations they made their international debut as long ago as 2003, going on to beat China twice a year later. Those wins in that year's Hong Kong Sevens remain Sri Lanka's international highpoint, however, and this will be a massive step up for a team that has never previously played outside Asia. There's a great piece on their buildup in this month's Rugby World Magazine.

In Pool B Australia start as favourites after winning the recent World Series. They have had a strong build-up, winning the World Series before an under-strength side finished second at the Oceania Sevens. Comparatively, their key rivals New Zealand managed just two events on the circuit as they dealt with Covid restrictions whilst Fiji missed the Spain legs before struggling in Langford. The experience of Charlotte Caslick and Sharni Williams will be key to their chances.

The other World Series team in the pool, Fiji are capable of beating anyone on their day (in the last year they have beaten Australia, England and Canada in the World Series, and New Zealand 5-1 in a six game series in Fiji) but also remain frustratingly inconsistent at times. Their most recent appearence was in May when they finished third in the final round of the World Series, a tournament that inclued a 59-0 win against South Africa, who they will meet again here. Coach Saiasi Fuli has named a team that includes 10 bronze medalists from the Tokyo Olympic Games. Veteran forward Rusila Nagasau will captain the side. A team that could win a medal of any colour.

Scotland will be led by co-captains Helen Nelson and Thomson, with many of the squad having impressed on the recent Rugby Europe Sevens Championship events in Lisbon and Krakow, finished runners-up in the first tournament and fourth in the second, results that built on an impressive performance in the Toulouse World Series round in May where they beat South Africa for ninth. However, sevens has not been a priotity for Scotland this year evidenced by  their rejection of a chance to compete for a place at the Sevens World Cup to concentrate on the 15s World Cup.

South Africa's appearence at the last Commonwealth Games was possibly the lowest point in the sevens history when they finished last, failed to win a game, and lost to regional rivals Kenya in the pool stage. It was an outcome that resulted in a complete rebuild of their sevens programme, immediatey withdrawing from all competition for over a year (apart from the 2018 World Cup that they had already commited to take part in, and where they could only beat Mexico). Since returning to competition they have won the African Sevens title twice, and beat Spain in the Toulouse round of the World Series, but lost to all of their three rivals in this pool..Avoiding last place this time around may be their best outcome.