China were back on form in Bangkok this weekend, winning a round of the Asia 7s for the first time since 2016. 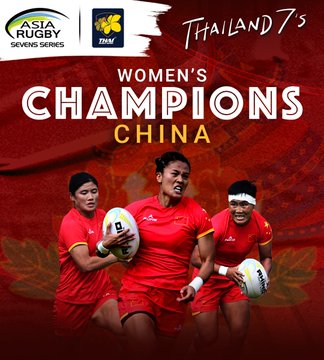 After a wait of over six years, China were back on top of the podium in an Asian 7s for the first time since winning in Incheon in September 2016.

The early headlines, however, we won by Thailand who dismissed Kazakhstan 34-0 in the opening game, the eye opener being less that Thai win, but more the margin of victory. The also ran Japan close before dismissing Philippines 51-0 on their way to a semi-final.

Japan were similarly too powerful for their pool opponents.

Pool B was reduced to three teams due to the ongoing suspension of Sri Lanka by Asia Rugby. Both China and Hong King saw off Malaysia comfortably to reach the last four.

Japan struggled a little in their semi with Hong Kong, going into the break 14-0, but failing to score in the second half. When Georgia Rivers scored for Hong Kong with a minute left a real shock seemed possible, but Japan held on.

Thailand were unable to repeat their first day heroics against China, who won the other semi-final comfortably.

Japan began strongly in the final, Marin Kajiki touching down in the first 30 seconds, but were unable to build on the lead and China were able to draw level at the break through Xiaoqian Liu.

Xao Wang put China ahead early in the second half, but Japan first pulled a try back after 9 minutes through Wakaba Hara before going ahead 17-14 with a try from Yuma Hirano with two minutes to go.

They held out until the final play of the game, Liu scoring her second try with just 10 seconds to go.