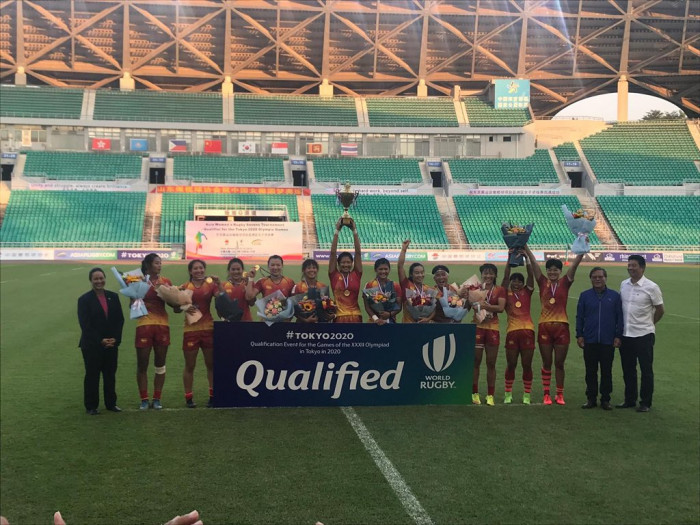 In the end it was a fairly straightforward win for China in Asia’s Olympic Qualifier, on home soil in Guangzhou as their main opponents fell away.

Eight teams travelled to China for the qualifier, seven from the Asian Championship plus Trophy winners the Philippines, taking the place of Japan who had already qualified as hosts.

In practice, however, only Hong Kong, Kazakhstan and perhaps Thailand represented a threat to the Chinese, as only these three had ever seriously troubled them in recent years.

China had drawn Hong Kong in the pool, but almost contemptuously swept them aside in the final game of Day One, wining 42-7. In truth the gap seems to be growing between the two teams, this was China’s third biggest win against Hong Kong, having recorded their best ever win in their previous meeting.

Kazakhstan won the other pool after surviving a scrap with Thailand, a team who can spring surprises but tend to be inconsistent, 17-12 also at the end of the first day.

This seemed to set up a likely final between the Kazakhstanis and China – they just needed to get past a young Hong Kong team in the semi-finals, which they totally failed to do. Tries from Ka Man Nam and Natahsa Olson-Thorne in gave Hong Kong a 12-0 lead at halftime. Nigora Nurmatova pulled a try back early in the second half, but Kazakhstani frustration got the better of them as they were unable to break down the Hong Kong defence, culminating with Balzhan Koishybayeva receiving a yellow card with just two minutes to go. Florence Symonds added a third try for Hong Kong shortly after, and it was game over.

After that the final was as one sided as previous recent results suggested it might be, China scoring five unanswered tries, despite being reduced to six players for a period.