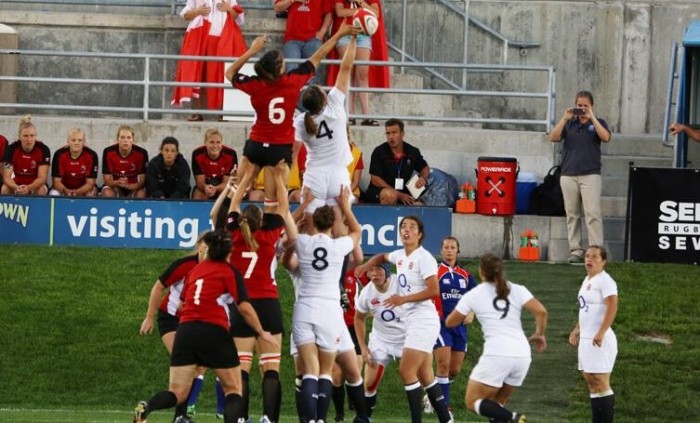 Canada won the 2013 Nations Cup with a second victory over England in a week in the final of the competition in Denver. It is a first ever Nations Cup win for Canada who also hold the U20s Nations Cup title, and it caps off a good season for the Canadian women’s programme who picked up a silver medal at the World Cup Sevens earlier this summer.

USA dominated South Africa from the off in their big win at Infinity Park - achieving their biggest test win since 2002.

In their loss to England at the University of Northern Colorado Wednesday, the Eagles rued multiple missed opportunities to score within five meters of the try line. In the 10th minute of Saturday’s match, Sarah Walsh made sure they did not struggle in the same situation with a strong push through two Springbok defenders on the line. Ringgenberg kicked her second conversion for a 19-0 lead.

Ringgenberg kicked a penalty from the 22 in the 17th minute to extend the lead to 22-0. Erica Cavanaugh received the ball at the South Africa 10 not long after the restart and broke a tackle before racing to the try zone to make the score 27-0.

Two minutes later, Nathalie Marchino fed captain Shaina Turley for a try, and Cavanaugh added another for a 39-0 lead before 25 minutes had passed.

South Africa scored their first try of the match in the 34th minute after a nice switch from the right side of the field to the left, where the Eagles were outnumbered. The Eagles took a 39-5 lead into halftime.

Ringgenberg began the second-half scoring with a penalty kick in the 44th minute and Phoebe Boone scored her first try in her first Eagles appearance in the 49th minute from a lineout. Meya Bizer kicked the conversion from tough angle and the Eagles had a 49-5 lead.

Within minutes of being substituted into the game, Megan Bonny broke a few tackles along the touch line and raced over the line for a 54-5 Eagles lead after 64 minutes. Kristin Zdanczewicz finished the scoring after Jillion Potter gave the Eagles advanced field position in the 76th minute. Bizer converted and the Eagles took home a 61-5 win.

“Obviously, we’re very happy,” Women’s Eagles Head Coach Pete Steinberg said. “South Africa is a good side. We came out of the gates hard and we scored some great tries, but I think we’re most proud of only holding them to one try. They’re probably the most dangerous team here with the ball in their hands.”

Although the result was the same, in every other way the game could not have been more different than that 10 days before. Whereas that match had been dominated by attacking flair and shaky defence - at times resembling sevens rugby, but with a few more bodies on the field - this was traditional fifteens.

England had beaten USA in their last game thanks to returning to the basics, keeping possession and going through the phases. Canada needed to disrupt that, and that required a different playing style than they had used in the pool.

Canada could not have had a better start. Barely had the game begun and they were ahead, after Jessica Dovanne broke down the midfield for a wonderful try, evading a number of defenders on her way to the line. Magali Harvey would add the extra points, to take Canada out to an early 7-0 lead. England soon answered with three points from fly-half Ceri Large, who kicked well throughout the game - the penalty being awarded, but not kicked, just before the players were forced from the field due to a thunderstorm and risk of a lightning.

When they returned Canada's game plan became clear. England attempted their previous tactic of keeping the ball with the forwards, while keeping down the commitment to the breakdown, thus retaining phase after phase. Unlike against the USA they were met with mass, highly aggressive, attacks from the Canadian forwards. No ruck was settled or won until the ball could be got away, there was no time to relax, more England forwards were dragged into each breakdown just to retain possession, and inevitably turnovers happened, England rarely getting beyond fourth phase.

Canada, on the other hand, kept the ball off the floor as much as possible at the start, quickly offloading from tackles, not allowing England to settle even in defence. In one glorious period of play Canada went through 18 tackles and offloads - a red tidal wave breaking on the England defenders.

And yet England held firm. With Canadian forwards unable to keep up with their exuberant backs, when a player was brought to ground she was often isolated - and turned over. The result was a curious, but fascinating, stalemate for much of the first half.

This was broken eventually broken when another England turnover resulted in a huge Canadian kick down-field which sent winger Bianca Farella flying in pursuit. The bounce favoured Canada, leaving the entire England defence flat-footed, Farella taking the ball before dodging the remaining English defenders and racing under the posts for a 14-3 lead.

England’s stepped up their power game and a long kick into the Canada corner by Ceri Large England gained possession at the 5-metre mark and drive for the line for a try from Laura Keates. The score remained 14-8 at halftime.

When the teams came out for the second-half, with Canada tightening things still further by offering greater support to their runners. In defence they continued to pile on the pressure at every breakdown, one result if which was an important pair of penalty kicks by Magali Harvey to extend Canada’s lead to 20-8, with only 25 minutes to play.

Once again, England looked to apply their power game and - once again - fly-half Ceri Large drove a penalty kick deep into the Canadian corner. The resulting England drive resulted in a Georgina Roberts try to bring England within seven points.

Canada made sure though when from a kick, they collected possession and drove towards half-way. The ball found Farella on the near wing and she rounded her English opposite number and out-ran the remaining cover to score under the posts.

Head Coach Francois Ratier said:  "Every win over a team like England is an enormous accomplishment, and this is a victory that should live long in the memory for Canada fans. Full credit goes to our players and Captain Kelly Russell. They executed our game plan perfectly. We knew the type of game we needed to play to defeat England and I could not have asked for a better performance."

Rarely can there have been a tournament where teams have looked and played so differently ten days later. We began with most teams playing a version of sevens rugby, we ended with proper fifteens.

Canada came away with the spoils. In a tight pool, they benefited from facing a fresh England team that had barely played together first up, and ended with a tired South Africa at the end. Probably more than any other team they changed and adapted their style of play throughout the week. Their lack of recent test experience was clear at the start, but they readjusted quickly and by the end showed that they could be a real threat in Paris.

USA will consider themselves unlucky not to make the final - given Canada's schedule they probably would have done. More settled than the other teams, their win over Canada will have been a highlight. Whether they yet have enough to break into the top four in the World Cup remains questionable.

South Africa again showed that they they can be a huge threat if the opposition chooses to rest players for their fixture, as inevitably they will in Paris. They have a number of hugely talented individuals - Nojoko, Jordaan, Gadu, Cronje - but whether they have the depth yet to move up from the position of dangerous underdog to a real threat in the final stages of a tournament is doubtful. However they have gone, in less than 10 years, from losing to England by 101 to losing by just one - which is quite an achievement. A young team, their time may come beyond 2014.

England will be disappointed to lose the final, but - after their opening game, and given the almost complete absence of any preparation time - will have been delighted to have got there are all. Not the strongest team available by any means, so it is hard to draw any firm conclusions for the future - other than there are a lot of seriously talented Englishwomen outside the first choice 23. The only significant concern might be that they cannot rely on out muscling their opponents up front any more. It was very noticeable that England made much less use of their backs throughout the tournament than any other team, but the rest of the world is catching up in terms of aggression and power up front. The development of an alternative strategy may be in order.