Canada march on, England bounce back

England beat France 17-13 - their first win over the French since 2013 - while Canada made it two from two with a fine win over the USA in the second round of games at the Women's Super Series in Utah. 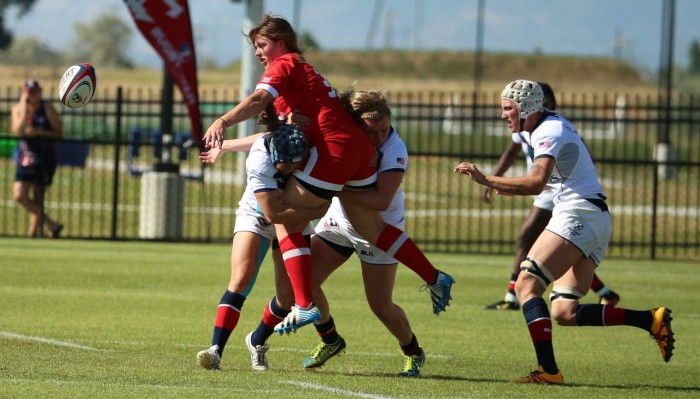 England bounced back from their heavy defeat at the weekend to Canada with a gutsy last gasp win over France in the Women's Rugby Super Series in Utah.

The try came in the last play of the game with Zoe Aldcroft scoring off the bench in her debut for England, after her side finally made their dominance throughout the second half pay off.

With a tight turnaround between the games in this series, to help ready the teams for the similar fixture schedule at next year’s World Cup, both sides had made a raft of changes to their starting line-up and as a result the first 40 minutes was a rather disjointed affair in hot conditions.

France took the lead through the fine boot of centre Camille Boudaud – one of the few French players to impress in attack alongside her midfield partner Elodie Poublan – and went out to a 6-0 lead in a first 30 minutes that brought numerous errors from both sides, denying the game of any real flow.

But England, through the excellent running of Alex Matthews and Sarah Hunter came back hard at the French, and despite the litany of handling errors, they kept possession well enough to give Amber Reed a shot at the posts before the break to make  it 6-3.

England dominated possession for the rest of the match and though they struggled to make it count, they will take heart in how their attacking shape improved as the game wore on, with Ceri Large and Reed making decent inroads through the middle and Leanne Riley speeding the game up off the bench.

It was Large’s surge for the line, after another Matthews break through the middle, that put England ahead and though France were forced to defend for most of the rest of the game, the one opportunity they were presented they took to put them back in the lead when replacement Romane Menager dived over the line following some tight play up front.

How France found themselves ahead having barely had the ball was less a mystery when England’s handling errors were taken into account but credit to the French for their passionate defence which looked like it was enough to see them through.

Ill-discipline in the final minutes was their undoing as England hammered away at the try line and finally the England pack drove over for the game-winning score with the clock in the red.

Lead coach Scott Bemand said: “That was another typically tough test against the French. Every time we play them, these are genuinely physical and hard matches.

“Perhaps we would have liked to have seen a bit more on the scoreboard but fair play to the French, they defended well and got us under pressure when they went ahead with 10 minutes to go. The character in our group of players, and how they came back from the result against Canada, to keep playing to the death, shows that they understand how to win these international matches.”

Canada continued its unbeaten run with another convincing win.

A win or draw against France would be enough for Canada to claim the Super Series trophy a year after losing all three matches of the tournament to the Eagles, England, and New Zealand.

"I'm really pleased with this performance," Burk said. "We're really coming together, players one through 26, we're coming onto the field to play together. It really showed today."

Over the two games, Canada has scored 85 points while conceding just 22 en route to a perfect 2-0 record.

Canada came out firing as Waters got Canada on the board just sevens minutes in as she took Zussman’s offload to the house for an early 7-0 lead. USA’s promising young prop Hope Rogers got the hosts right back in the contest though as she powered her way over the line in the 18th minute to cut the lead to 7-5.

With Canada continuing to push forward with no result on the scoreboard, it wasn’t until the 34th minute the visitors could add to their lead as Burk slotted her first penalty of the day before Menin pushed her way over the line to grab Canada’s second try minutes before the half time whistle to give Canada a 17-5 lead at the interval.

It was an ideal start to the second half for Canada as the USA’s Jenn Sever was sin binned for an infraction at the breakdown in the 44th minute allowing Burk to push Canada’s lead to 20-5.

It was then Burk’s turn to get in on the try-scoring fun four minutes later as off of a driving maul, Canada swung the ball wide where Burk picked up the ball at the back of a breakdown and bulldozed her way over the try line for a 25-5 advantage.

After Burk added a third penalty, Zussman completed the scoring in the 77th minute as with the USA down to 14 players again — Jamila Reinhardt sent to the bin for a breakdown infringement — the Montreal native took Waters’ skip pass and raced in for Canada’s fourth try to seal another emphatic win for the fourth ranked Canadians.

"It was just a messy game - not a whole lot of flow," Head Coach Pete Steinberg said post-match. "We have to take it and we have to grow from it. Our goal is always to play our best game on our last game. That last game's against England and that's what's in front of us."