Canada & England into the final

Canada and England are into the Nations Cup final after a dramatic round of games saw host nation USA lose out on point difference. Canada’s high scoring win over South Africa proved key as England then went on to defeat the only unbeaten side left at the competition, USA, and secure their place in the final this weekend. 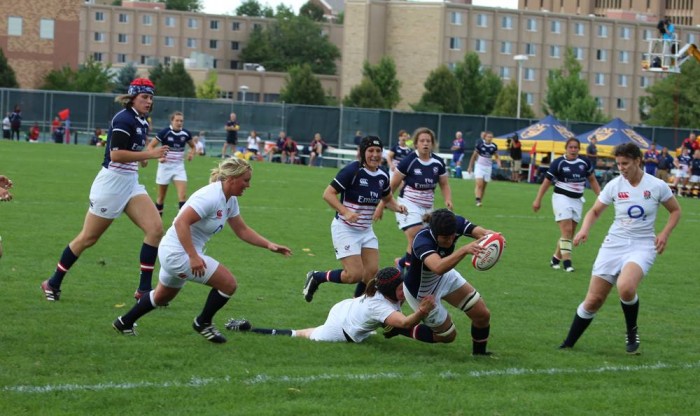 Going into Wednesday’s match with five points, Canada needed to beat South Africa and score at least four tries to have any chance of getting to the Nations Cup Final. They did just that and more with a 53-17 win, pushing their point differential to plus-28.

It took just six minutes for Magali Harvey to give Canada the lead with a burst of speed down the wing. She converted her own try from in front and the Maple Leafs got the start they wanted.

Canada scored twice more through Harvey and Bianca Farella and had a 19-0 lead before 20 minutes had passed. A few minutes of pressure from South Africa forced a short Canada clearance kick and the Springboks found themselves in the try zone, but held up by Canada. South Africa won the ensuing scrum and eventually Marlien Cronje put her side on the scoreboard with a diving try.

Farella increased the Canadian lead to 24-5 in the 26th minute after a great individual effort to break free from three South African defenders at the 22 and sprint to the try zone. South Africa responded 10 minutes later through the talented Zenay Jordaan and almost scored another before the halftime whistle. Zandile Nojoko tried a nifty chip kick from 10 meters out but could not catch up to the ball before it reached the back of the try line. Canada took a 24-10 lead into the half.

Canada started the second half much like the first with a try from Elissa Alarie two minutes after the whistle. In the 48th minute, Stephanie Bernier extended the lead to 36-10 after a big run from Jacey Murphy at midfield. Three minutes later, a Kelly Russell quick tap and offload to Sammy Crandell increased the lead once again to 41-10.

Jordaan scored another try in the 58th minute for South Africa, but Canada scored two more before the end of the match to take the 53-17 win.

“We knew the South Africans are very unpredictable and very quick on the turnover,” Canada Head Coach Francois Ratier said. “We made mistakes against the Americans and tried to play too much of a wide game without doing the fundamentals. We did everything we could do today to get to the Final."

Despite wins in the first two matches at Nations Cup, USA lost out in a place in the Final after this 21-36 loss to England, who will be delighted with their display after a tough opening two games in the competition.

England dominated possession early and the Eagles did not touch the ball until the fifth minute after a hit from Kimber Rozier knocked it loose. A lineout in the ninth minute was mishandled by the Eagles and England’s Ceri Large capitalised by splitting Christy Ringgenberg and Nathalie Marchino for the game’s first try.  Experienced prop Rochelle Clark added a second in the 15th minute for a quick 14-0 lead.

Anne Peterson put the Eagles on the board in the 17th minute after Jocelyn Tseng forced a penalty as England showed impressive form in defence in those exchanges.

England won a scrum in the 30th minute and Sarah Hunter burrowed over for another fine try for a better lead  but USA responded in the 34th minute with their first try after Tseng offloaded to an oncoming Stacey Bridges. Peterson’s conversion was wide, keeping the score 8-21.

England’s hard work was rewarded further before the break when Emma Croker added one last try for England an 8-26 half time lead.

Jamie Burke entered the game at the start of the second half to earn her 41st career cap, officially passing Patty Jervey for the all-time caps record in a USA shirt.

Peterson successfully kicked another penalty in the 58th minute and Marchino showed her pace again to score a try in the 68th minutes for the hosts, but England responded minutes later with Rowena Burnfield try.

With less than a minute remaining, Burke capped off her historic night with a try to make the final score 21-36.

See here for the final standings and the line ups