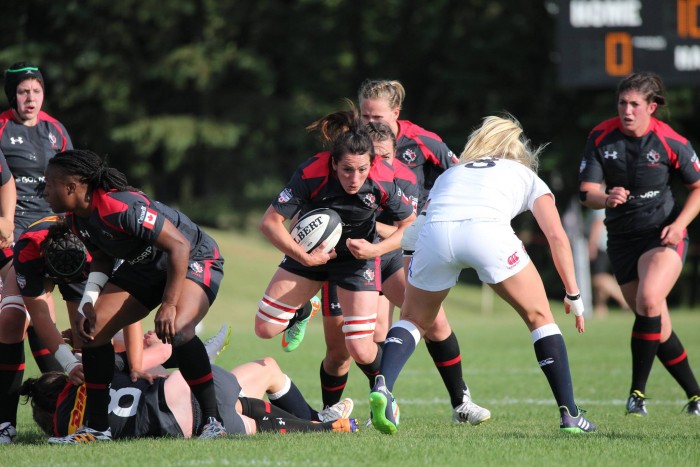 The North American series will take place in July and will include England, France and Canada as well as hosts the United States.

Additionally, Ratier has also selected a 23-player Maple Leafs (A) team that will also compete in Utah against the USA All-Americans.

“It’s very important to be in Utah with these two teams,” Ratier said. “It's an opportunity for our senior team to continue on the road to the 2017 Women’s Rugby World Cup while giving members of the Maple Leafs a chance to perform and win or reclaim a spot with Canada in the future as well.”

“We are still looking to increase our depth at some key positions like scrum half and fly half,” Ratier said. “We want to make sure we can have more than two options before the Women’s Rugby World Cup.

Additionally, Emily Belchos and Kayla Mack, veterans of Canada’s second place finish at the 2014 Women’s Rugby World Cup, have been released from Canada’s women’s sevens programme to play on the senior side.

“They haven’t played fifteens since the last World Cup but they are fit and they know how to play rugby,” Ratier said.

Canada will face England and France in addition to hosts USA over a nine-day period. Last year, Canada was narrowly beaten 15-14 by England while USA edged past Canada 36-28 in Red Deer. Canada has not faced France since defeating them in the 2014 Women’s Rugby World Cup semi-final.

“England are the World Champions, France just won the Six Nations and USA is always a big battle so the competition will be tough,” Ratier said. “But that is what we need to be better and stronger.”

Later this year, Canada will head to the UK for another tour as preparation for the Women’s Rugby World Cup next year and while two sides have been picked for the WRSS, it’s not an indication of selection for that tour.

“We will pick the November squad for the UK based on performances with Canada, the Maple Leafs, National Championships, CIS and released sevens players so it’s a busy Summer and provides many chances for the players to confirm or win a spot in the senior team,” Ratier said.