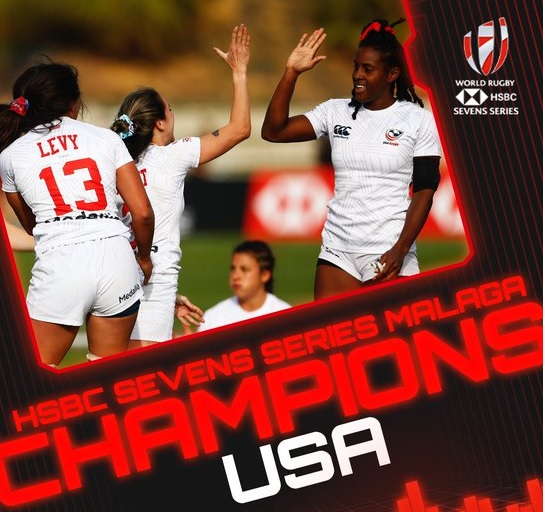 The United States have won the Malaga Sevens, going unbeaten across the three days.

The US have taken a different route, post-Olympics, to their North American rivals Canada, and their experienced team dismissed the young Canadians first up with two tries either side of halftime, with Canada gaining a consolation. A 31-7 win against Poland ensured a Pool B win following Fiji’s withdrawal.

Although the USA topped the pool without having to play in the third round of games, the final Pool B game was still memorable for invitational side Poland’s impressive win against Canada. Two early tries gave them 10-0 half time lead. Canada fought back to lead 14-10 with two minutes to go, only for Malgorzata Koldej to use her searing pace on the wing to complete a stunning hat-trick and memorable 17-14 triumph.

Pool A was won by Australia, but not without a struggle against Ireland, who lead twice before Alysia Lefau-Fakaosilea’s try won it for Australia. Ireland took second spot in the pool, however, with Spain missing out on a home quarter-final thanks to a lacklustre opening day that, as well as a 21-defeat 5 to Ireland, saw them concede three tries to Belgium, points that were to make all the difference when places in the quarter-finals were decided.

France took Pool C comfortably with three strong wins against England, Brazil and Russia. Russia were second and England qualified for the quarter-finals in third. After a good performance in Dubai, and a strong start against Russia, Brazil struggled both in this pool and in the classification matches, eventually losing to Belgium and ending 11th. Spain ended 9th and Belgium 10th.

USA were always on top against England in the opening quarter-final, but an Emma Uren try lead to a tense final two minutes, the States holding on to win 22-17.

The other quarter-finals were more one-sided with good wins for France, Russia and Australia.

The top four seeds thus made the semi-finals, but the results of these games certainly did not go with seeding.

The USA took a 14-5 half-time lead against France, and then held on against fierce French pressure in the second half. The French could only add one score and the USA were in the final 14-10.

The second semi-final was a classic with the strike and counter-strike. Russia lead 19-14 at halftime, and extended that lead to ten points early in the second half. A Madison Levi try pulled Australia back to within three, before Viktoria Em’s try with two minutes left restored Russia’s two-score lead. Madison Ashby crossed for Australia in the final minute, but time was up and Russia were in the final 29-26.

The final was tight for most of the first half, but the USA ran away with the game in the second period with three unanswered tries from Jaz Gray and Ilona Maher to give the USA their first World Series tournament win since 2019, and third overall.

This season, however they are now in fourth place overall. Australia are ten points clear at the top, with France second and Russia third. Fiji’s no-show has dropped them from second to fourth. All of the podium places have been shared by these teams, so the series winning looks like coming from one of them.

At the bottom – if relegation happens - it is currently a tight battle between Spain (17 points) and England and Brazil (both on 16).