Former USA player Emilie Bydwell has been appointed as head coach of the USA women's 7s team, becoming the first woman to assume a head coaching role of a core World Series side. 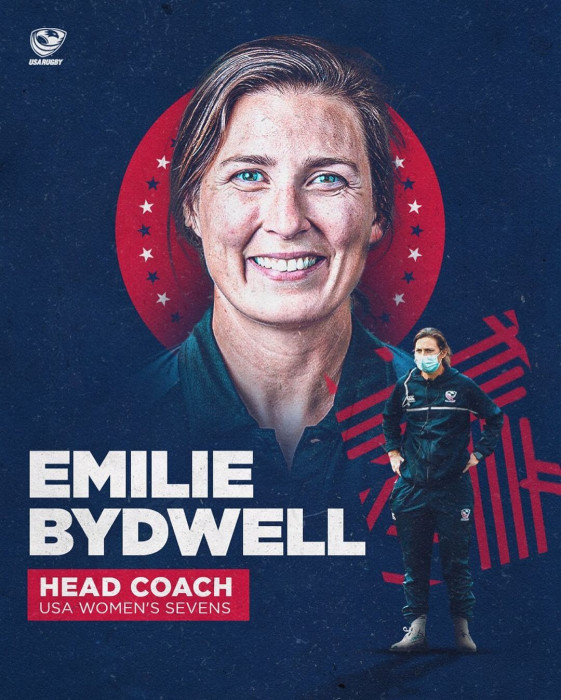 Bydwell has a wealth of experience both as a coach and as a player at this level.

As a player, she represented both the USA XVs  team with 21 caps and sevens teams across two Rugby World Cups in 2010 and 2014, as well as winning the bronze medal at the 2013 Rugby World Cup Sevens.

She has over a decade of coaching experience across the youth, college and club game, starting at Brown University before coaching senior club rugby, where she went on to win three consecutive USA Rugby Club 7s National Championships with Atavus Academy and San Diego Surfers respectively. In 2016, she was named the USA Rugby Coach of the Year.

More recently she led the USA sevens team as interim Head Coach during the recent Fast Four tournaments in Canada, as well as the 2019 Pan American Games where the USA came home with a silver medal and new appointement will mean she leaves her role as the USA Rugby Director of Women’s High Performance, where she has had a considerable impact.

“It is the honor of my career to be selected for this position,” said Bydwell, “I have been working towards the dream of coaching this team and leading this program for over a decade. The USA Women’s Sevens team is more than a rugby team, it is a group of incredible women that have the power to inspire meaningful change in their communities and unite our country through their actions and gold medal performances.”

“My goal has always been to find a way to unlock the potential of this team and programme, on and off the field. We have a unique opportunity to develop a truly American brand of sevens, and ultimately, win Olympic Medals.”

“To be selected for this position only a month after my first National team coach, Kathy Flores, passed is emotional and impactful for me because I know the road she paved for decades is now one that I can walk confidently. I hope to carry her legacy forward, produce results, and inspire other women to pursue international coaching roles.”

Bydwell continued, “We all know that there is no time to waste as we look towards the Rugby World Cup Sevens in Cape Town and the Paris Olympic Games. With a shortened quad and a World Cup on the horizon, we have taken learnings from the Olympics and will hit the ground running. We are aware of the power and strength our player group has. In order to play the game we want to play, we need to increase our levels of sevens fitness and repeated efforts and improve our ability to dictate the game tactically.

“Currently, we are entirely focused on our two-tournament campaign in Dubai where we have an exciting squad who is ready to step over the line and into a new chapter. Ultimately, my goal is to deliver a team that plays to their potential under pressure. While the foundation has been developed, we have less than three years to cement the skills and physical capacity required to do so. Now we go to work.”

USA Rugby CEO, Ross Young added, “Having followed Emilie’s coaching career for many years now, I am delighted to have her expertise, knowledge and energy in this position. With her close involvement in the program since 2017, we have watched the impact she has with the team during their most successful years and are confident that she will continue to build on that trajectory heading into Paris 2024 as medal contenders.”