South Africa’s U20s returned to international action in impressive fashion on Friday, outplaying their Zimbabwean U20 counterparts, the Junior Sables Women, by 55-0 at the Fanie du Toit Stadium in Potchefstroom after leading by 19-0 at the break. 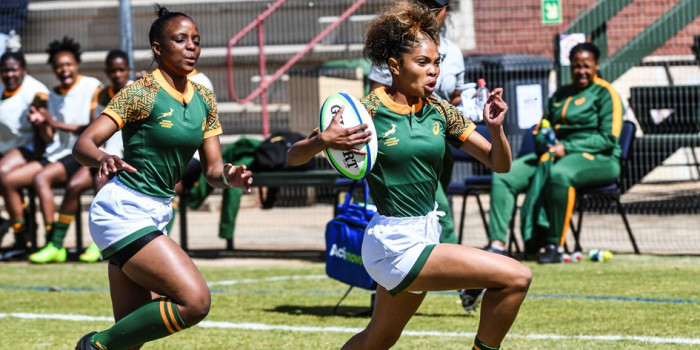 The match was their first since 2019 and it took the SA U20 side a while to settle down, with handling errors and penalties conceded at the breakdowns the early culprits, but once they found their groove, there was little the opposition could do, game as they were.

In the end the nine tries to zero was the clearest indication of their dominance, with six second half tries indicative of their better execution after the break.

The South Africans, playing with a strong wind in their backs, pinned the Zim side in their half and it wasn't long before they crossed for their first try. It was a lovely try to start the game, with fullback Johnerecia Booysen finishing off a flowing backline move. Flyhalf Byrhandre Dolf converted for a 7-0 lead after four minutes.

That was soon extended to 12 when lock Vainah Ubisi finished a strong run with a try in the corner.

The next 30 minutes brought more parity as Zimbabwe managed to get their hands on the ball and launch attacks, albeit from in their own half.

The SA side made too many handling errors at this stage as over-eagerness and the wind played a role, and wing Ruscha Garsman not making things easier when overrunning the in-goal on her way to a try. South Africa also conceded lots of penalties at the breakdown.

There was some introspect though, and the handling started to improve with immediate results when powerhouse prop Lebogang Ralebona crashed over with numerous defenders hanging on for the ride. Dolf converted for a 19-0 lead after 33 minutes.

Ralebona turned villian just before the half-time whistle though with a coat-hanger tackle, leaving referee Ashleigh Murray-Pretorius no option but to send her to the bin with a yellow card. Her presence in the match was huge and it is only a matter of time before the Limpopo player will be in the senior set-up.

Zimbabwe started the second half better with the wind in their backs. They came close to scoring in the opening ten minutes with just desperate tackling and a crucial turnover by the Junior Bok Women near their line preventing them for points.

A first try to left wing Asiphe Mayabe again showed the ability of the home side to threaten on attack if they hold on to the ball and extended the lead to 24-0.

Zimbabwe then paid the price for an indiscretion by fullback Kuzivakwashe Gonangombe which saw the SA side putting the ball in Ralebona's hands. That resulted in her second try and when Dolf converted, the lead was 31.

In a blink Garsman was over the line following a strong break by Mary Zulu, with the wing this time making sure she gets the ball down in time. Suddenly the score was 36-0 and the alarm bells were going off in the Zim coaching box.

Elme Kruger scored next within two minutes after the replacement flyhalf came off the bench and she converted her own try for a 43-0 lead.

Garsmann bagged another when Zimbabwe executed a poor clearance kick near their line and the wing gracefully excepted the scoring opportunity. Kruger kicked a pearler from the touchline and 50 - looking so unlikely in the first half - displayed large on the scoreboard.

Credit to Zimbabwe, who defended bravely and never left the fight, but with their rhythym and confidence growing, the green and gold team was now slick on attack and sniping on defence. The impact of the bench also brought some nice energy with loose forward replacement Zena Swart keen to lay down a claim.

A late try by prop Anelisa Ndamase confirmed the dominance enjoyed by her side.