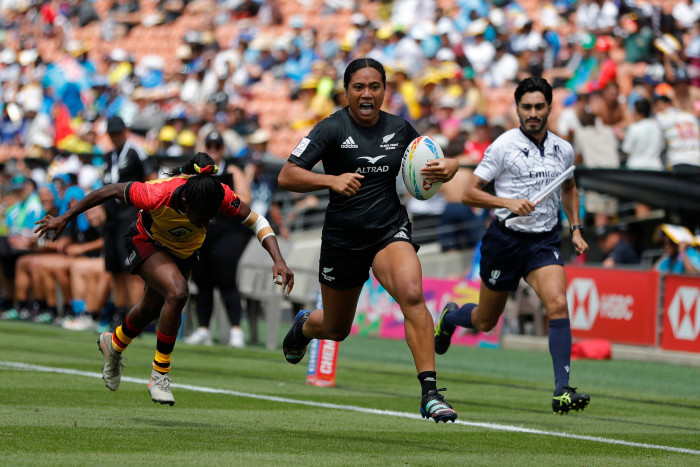 New Zealand made the most of what is likely to be the last visit of the Sevens World Series to their home shores by winning the Hamilton Sevens. With Australia missing out on the final, the have opened up a clear lead in the series and look favourites to win back the title.

Michaela Blyde was one of the stars of the weekend and she grabbed a hat-trick in in a final, which her side won 33-7. Blyde's try double with one in the middle from Jazmin Felix-Hotham and three conversions from Tyla Nathan-Wong put them 21-0 up.  Cheta Emba rounded off a good personal weekend for her with a try for USA converted by Alena Olsen, but there was no stopping New Zealand. Blyde completed her hat-trick and then Portia Woodman-Wickliffe  finished it off with another score.

New Zealand now have a silver and two golds from three events while USA have two bronzes and a silver.

They had begun their campaign on Saturday by winning Pool A at a canter, failing to concede point to Fiji, Great Britain or Papua New Guinea. A Stacey Fluhler hat trick saw them demolish Papua 58-0, leading the way with a hat-trick of tries, which they followed up with a 27-0 win against Fiji and 20-0 against Great Britain.

Elsewhere in the pool Fiji went against the seeding with a 19-14 triumph over Great Britain, Ana Maria Naimasi, Lavena Cavuru and Adi vani Buleki with the tries for the victors. However, GB did enough in other games to qualify for the quarter-finals as a best third place.

The other two pools were won by Australia and USA, who also ended Day One unbeaten, but nether team had it as easy as New Zealand.

Maddison Levi had an amazing day for Australia. Her brace of tries were key to a win against in-form Japan 26-14, she repeated the feat against Canada as Australia won 33-7 Levi scored tries five, and then rounded her day off with a hat-trick as Australia dominated a lack-lustre France 43-0 to finish top of the Pool.

The French – fifth in the series at the start - had been lucky to get away with a draw against Canada, only a late try by Ian Jason and a conversion by Yolaine Yengo saving them. Jason , Joanna Grisez, Lili Dezou and Valentine Lothoz all crossed in a 26-12 win over Japan, but French weaknesses were exploited in that final match against Australia.

After two good performances, Japan recorded a first ever World Series win against Canada 17-7, Yume Hirano, Michiyo Suda and Mayu Yoshino their try scorers which was enough to give them their first quarter-final since 2014.

A Cheta Emba hat-trick was the highlight when the USA opened their campaign with a 31-12 triumph over Spain, followed by Sammy Sullivan repeating the feat with three tries as USA thumped Brazil 41-0

Meanwhile Ireland – Europe’s leading team in the series – had begun with a 28-5 win for Ireland over Brazil, Amee Leigh Murphy Crowe the standout performer with two tries, followed by a 31-5 defeat of Spain.

That meant that Ireland and USA would fight it out for top spot. An unconverted try double from Naya Tapper put USA 10-0 up at half-time in that one and, in the end, the Americans won 15-7.

Brazil beat Spain 36-17 but it was not enough to make the final eight.

On Sunday Charlotte Caslick led the charge in the opening quarter-final with two tries as Australia dominated Great Britain to win 38-0. Next up, USA were also in charge against Fiji, Ilona Maher, Kristi Kirshe, Naya Tapper, Sammy Sullivan and Alex Sedrick their try scorers as they got through 27-7.Beibhinn Parsons (2), Amee Leigh Murphy Crowe and Megan Burns were the Ireland try scorers in quarter-final three, France put to the sword 24-7.

Finally New Zealand conceded their first points of the weekend, but 12 points was never going to be enough for a battling Japan outfit. The hosts scored 43 of their own, Risi Pouri-Lane (2), Jorja Miller, Shiray Kaka (3) and Portia Woodman-Wickliffe their try scorers.

Australia were leading 7-5 late in the first half of their Cup semi-final with USA before a Sullivan try  put USA 10-7 up. They then defended very well in the second half to progress by that scoreline.

The second semi-final was a bit more one sided, Miller (2), Stacey Fluhler, Michaela Blyde (2) and Woodman-Wickliffe scoring in a 32-0 triumph.

Bronze final and classification matches
Australia ended the series third thanks to a win over Ireland in their bronze final. Beibhinn Parsons bagged a try double for the Irish but Bienne Terita did the same for Australia to lead the latter to third. The Australians also had tries from Charlotte Caslick, Teagan Levi and Alysia Lefau-Fakaosilea to come out on top 33-17.

They now have a gold, a silver and a bronze from the three events played.

Heather Cowell and Emma Uren scored tries and Meg Jones kicked one conversion to help Great Britain get the better of Fiji in the first fifth place semi-final. Late second half tries from Yume Hirano and Michiyo Suda, with the latter adding one conversion, then helped Japan edge past France 19-12.  In the fifth place final, Marin Kajiki scored two five pointers for Japan to keep them in the hunt, but converted scores from Grace Crompton and Isla Norman-Bell gave Great Britain the 14-10 win.

France dusted themselves down from their disappointing fifth place semi-final defeat to Japan to take seventh. In the seventh place play-off they got the better of Fiji 34-5 with Séraphine Okemba, Yolaine Yengo (2), Chloé Pelle (2) and Lou Noel scoring their tries to end the weekend on a positive note.

Brazil blew away Papua New Guinea in the first ninth place semi-final. Rafaela Zanellato, Thalia Costa (3), Marcelle Souza, Gabriela Lima and Thalita Da Silva Costa were the try scorers for the victors. Next up, it was a much tighter affair as Spain managed to get past Canada 7-0 thanks to a try and a conversion from Claudia Peña Hidalgo. Spain took heart from that battling performance and, in the ninth place play-off, got the better of Brazil 17-12. Eva Aguirre Diaz led the way with a try double and Bruna Elias also crossed.

So, where is the series after Hamilton?

* A European team will take the vital fourth Olympic qualification place. With France having already qualified as hosts this looks certain to be Ireland.

* Japan were a revelation with their best performance for nearly a decade. Can they repeat this in Sydney next weekend?

* As with last year, Fiji – who began the series so strongly – appear to be fading.

* All 11 World Series teams should qualify for the Olympics for the first time, either from this series, regional tournaments, or (in likely Spain’s case) the repechage. The 12th team will come from Africa, making the 2024 Games potentially the most competitive ever.