Biggest ever African 7s this weekend

The biggest ever African Championship takes place in Monastir, Tunisia this weekend with places at next year’s Olympics and the World Series Qualifier on the line. 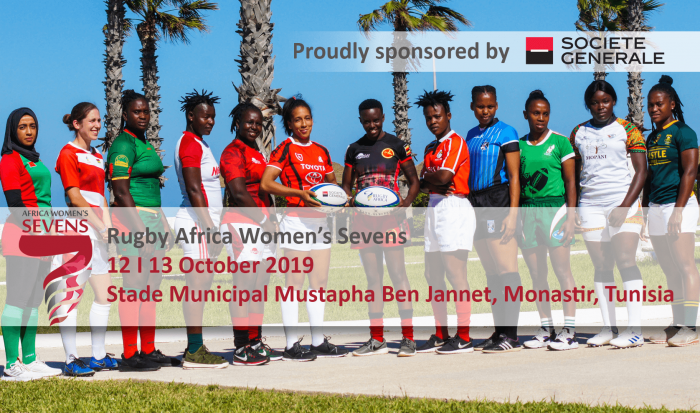 The lure of the Olympics is a fantastic thing, with a dozen team from all over Africa descending on Mediterranean coast this weekend. The last time the championship was here, two years ago, eight teams took part, while last year in Gaborone there were ten. Those ten all take part again this year, but are joined by South Africa (who withdrew last year after a disappointing Commonwealth Games) and Ghana, who return to international action after a ten-year absence.

South Africa are one of the favourites for the competition having won every African Sevens that they have entered, but their non-appearance last year gives them a ranking of 11 for this year’s tournament. Coach Paul Delport has named an experienced squad of sevens specialists, lead by Zintle Mpupha, one of six players who played in the World Cup Sevens last year, the others being Buhle Sonomzi, Zinhle Ndawonde, Zenay Jordaan, Nadine Roos and Eloise Webb.

Catha Jacobs has played for the “Imbokodo” (the sevens team’s new nickname) on tour in the Centrale Sevens and Nancy Sevens in France earlier this year, but has yet to appear in an international tournament, and Liske Lategan and Meghan Philips will also pull on an international shirt for the first time.

Unfortunately, in the week leading up to the competition, South Africa have been attracting headlines for the wrong reasons after SASCOC – the South African Olympic Committee – confirmed that they would not be sending the team to the Olympics regardless of how they are placed in the tournament. The Committee have a policy of only sending “medal prospects” to the Games, which for most team sports means only teams that qualify through worldwide competition, not through a purely African route.

This would mean that South Africa would have to finish in the top four of the World Series, a competition they have not been part of since 2015 – partly because SASCOC also pulled them from the 2016 Games as well, which then acted as a World Series qualifier.

A spokesman for the SARU told us that “Obviously we are very disappointed with the decision taken by SASCOC, but have asked our Minister of Sports, Arts and Culture, Nathi Mthethwa, for guidance on this matter and mentally, the squad left that issue behind in South Africa as we have no control over that final decision.”

However, there is still plenty to play for as the tournament will decide Africa’s two representatives at next year’s World Series Qualifier.

“What we can control though with our performances, is the opportunity to qualify as one of the  two teams going to the qualifying tournament for the World Series, and that is our main goal this weekend. Getting back onto the circuit is very important for us and reason why we have a women’s sevens programme with contracted players.”

While South Africa have a remarkable record in the tournament, last year’s champions Kenya will probably start has favourites having won two of the three games between the two teams last year, only lost the third in extra time.

Kenya will also have the incentive of looking to avenge their loss to South Africa in the continental fifteens championship earlier this year.

It has not been an easy preparation for the tournament, however, as there have been disputes between the KRU and the government over the latter’s alleged failure to meet all of its promises for allowances for the teams, which affects their tournament preparations.

Uganda’s women’s sevens team were the first sports team to represent the country at a world cup, but have fallen back since that high point ten years ago, with again funding being a barrier.

However, the “Lady Cranes” have been in camp since 3rd October and are confident, despite drawing South Africa at the group stage. Coach Helen Koyokoyo Buteme has named a squad that sees Charlotte Mudoola retains her position as captain assisted by Grace Auma.

“This team has dynamic individuals with varying skill sets and they complement each other very well”, she said. “I am looking forward to seeing how they apply what we have been working on over the last month and a half in training during an actual tournament situation.”- Coach Helen Buteme

Another team faced with a reported funding crisis is Zimbabwe - the “Lady Cheetahs”. Precious Marange, who also plays cricket for her country, will lead the team. “Being the most experienced player in the squad I’ll obviously hope to set the tone for the youngsters so that they won’t be scared or overawed by the situation,” Marange said before the team’s departure for Tunisia on Wednesday.

Marange however revealed that the current economic environment had made their preparations for the tournament very difficult. “We are so excited to be heading to Tunisia but our preparations were so hard. At the moment, the situation in our country is also so difficult but we promise to do our best in Tunisia,” she said.

Zimbabwean journalist Farai Machamire expanded on this on Twitter this week saying that “the side has had to do without training kit, no prospect of remuneration and often using personal funds for transport to get to the training venue.”

Perhaps the most fascinating story from the tournament is the return of Ghana to international sevens for the first time since the hosted the CAR Africa North West tournament in Accra in 2009.  The team prepared in a club tournament in Lome in Togo two weeks ago with two mixed Club teams that included most of the national squad players where they won all the matches convincingly.

“We are grateful to Togo Rugby for organising the competition”, said Rafatu Inusah, Ghana’s women’s rugby representative. “The match exposure not only helped the coaches and teams to identify areas to be worked on, but it was an essential exercise to set the tone and mindset for Tunisia”.

The remaining women’s regional qualification tournaments are set to take place next month, with the Oceania Rugby Sevens Championship in Suva, Fiji on 7-9 November and the Asian qualifier in Guangzhou, China, on 9-10 November. The final two places in the women’s competition in Tokyo 2020 will be determined by the World Rugby Olympic Repechage tournament in June 2020. The second and third-placed teams from Monastir this weekend will join France, Russia, Argentina, Colombia, Mexico and Jamaica as the already confirmed teams in this Repechage.