Australia capped off a magnificent year to be crowned World Cup Sevens Champions in Cape Town - adding to the Commonwealth Games title they won last month and the World Series, which they won earlier this year. 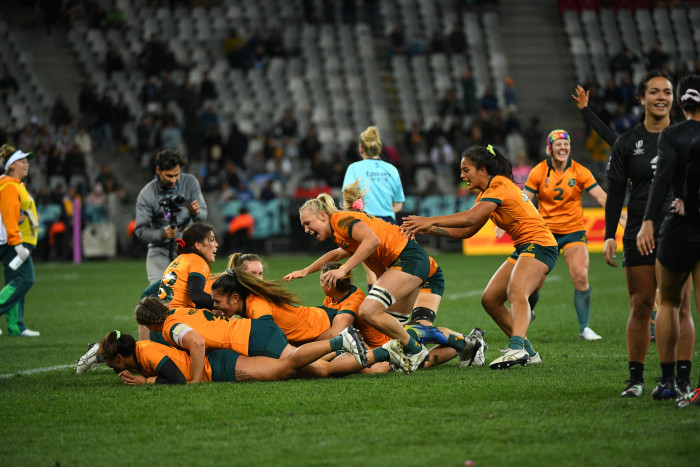 Since crashing out at the Olympics last year, Australia have hardly put a foot wrong, with a trio of titles coming within a few months.

Spearheaded by the vastly experienced Sharni Williams and Charlotte Caslick, players like Maddison Levi and Faith Nathan have been outstanding in their charge for gold.

Williams was player of the match in the final and there was a brilliant hat-trick for Levi in a final where a yellow card for New Zealand's Niall Williams proved costly.

New Zealand were 24-10 down at one point but clawed it back to 24-17 and grabbed a last ditch try through Alena Saili, handing Tenika Willison a shot at a conversion which would have put the game into extra time. Her kick though went agonisingly wide and Australia were crowned champions of this World Cup for the first time since 2009.

France won a bronze medal, beating USA in the third-place playoff with an outstanding performance to cap a good few days. Chloe Pelle, Joanna Grisez and Seraphene Okemba were among the stars and France will be thrilled with their medal after a poor semi-final in which they were totally dominated by New Zealand.

Fiji absolutely hammered Canada 55-0 to finish fifth - a disappointing result for a young Canadian team who had showed well before then. Reapo Ulunisua was in superb finishing and kicking form for the Fijians.

Ireland beat England comfortably to finish seventh - a good return considering their hammerings against New Zealand and Fiji, while Japan won the Challenge Final with their win over Poland.