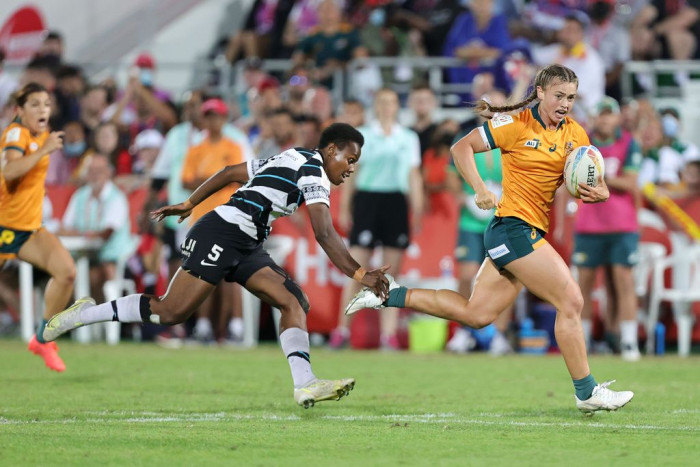 On the opening day Australia’s Maddison Levi’s prolific try-scoring form in 2022 continued as they racked up three wins to top Pool A.

The United States also won their first two games, albeit by smaller margins, and they took an early lead going into the top-of-the-table decider with the Australians following a defensive mix-up. But from that point onwards, the reigning Dubai champions took control of the scoreboard thanks to Levi who scored four times in a 29-12 victory

Canada beat China 26-10 in the final game of pool play but fell just short of securing a place in the last eight as one of the best two third-place sides.

Ireland recorded their best finish to the Series last season, by taking fourth place on the standings, and started this campaign well with three straight wins to top Pool B. Spain were beaten 21-7 in their first encounter and Ireland always had enough in reserve against Japan despite a spirited comeback to win 31-24. They then rounded off a good day with a 24-17 win against Fiji, Eve Higgins crossing twice to double her tally for the tournament.

Spain bounced back from their defeat to Ireland with victories against Fiji (21-14) and Japan (33-7) ensuring them second place, while Fiji had done just enough to finish as one of the best two third-place sides.

With New Zealand and France both defeating Brazil and a spirited Great Britain, top spot in Pool C rested on the outcome of the match between the unbeaten teams. Camille Grassineau got France off to a flyer but New Zealand powered back to score three tries without reply. Valentine Lothoz then gave Les Bleues Sevens a fighting chance with three minutes to go but a try from veteran Niall Williams and Michaela Blyde’s second of the match secured the Black Ferns Sevens a 31-12 win.

Kelly Brazier’s hat-trick was the highlight of New Zealand’s 35-5 win against winless Brazil, while Great Britain were beaten 19-12. Lothoz scored twice in France’s 34-7 win against Brazil and she also got the last-gasp winner against Great Britain.

On their first Series appearance since replacing England, Great Britain finished within a score of the top two teams in their opening games, and made it through to the quarter-finals as one of the best third-placed sides due to their 38-7 win over Brazil. Jas Joyce scoring in every game.

The second quarter-final was far closer, USA just edging Ireland with a single Naya Tapper try midway through the second half.

The longest rivalry in women’s sevens continued with its 54th edition when France met Spain next. A hard fought first half ended with France just ahead 7-5, and the second half did not disappoint with France only ending Spain’s challenge with a second try from Lou Neal from the final play.

After some tight games, the final quarter-final saw more tries than the previous three put together. The lead changed hands three times in the first half, Australia ending 19-14 ahead. A brace from Faith Norman extended the Australian lead at the start of the second half and, despite Fiji pulling one try back, the champions reach the semi-finals 38-21.

The semi-final proved more one sided, with both New Zealand and Australia scoring six tries against USA and France, with only the French managing to score in return.

Australia lead the final from the start, and never relinquished their lead, though the Ferns were always in the hunt. Sharni Williams converted her own first minute try, and those two points were what separated the teams at halftime after it and a Faith Norman try for Australia were cancelled out by two tries from Michaela Blyde.

Australia controlled the second half, with the Ferns unable to get out of their own half until the final minute. By that time Maddison Levi and Demi Hayes had extended their lead to 26-12, and a third try from Blyde at the end was the only consolation for the Ferns.