Australia eventually got the best of their Fijian opponents on Friday evening (6th May), but the 21st ranked team gave their 5th ranked opponents a few scares on the way..

Also earlier in the day, Japan had beaten an Australian Barnarians XV. Reports on both games follow. 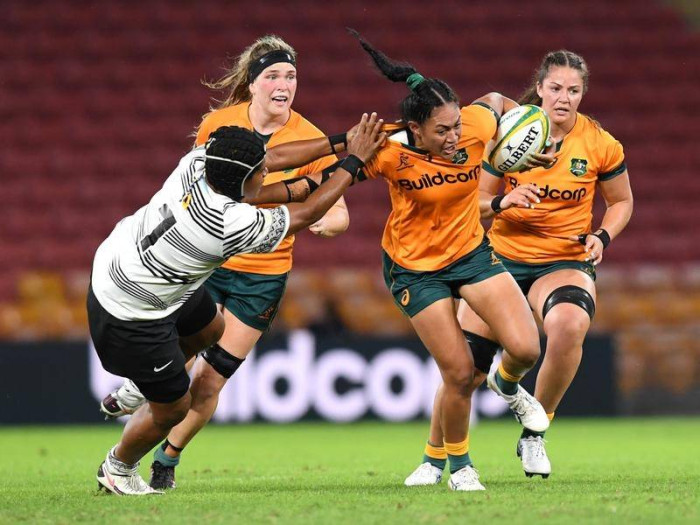 Pauline Piliae (c) was player of the match in the Wallaroos' 36-19 rugby Test win over Fiji. (The Islander)

Fiji ended their stay in Australia, which had included a memorable Super W triumph, with an impressive performance against their hosts, but it was also a performance that showed the areas that the islanders will have to work on before the World Cup later this year.

After waiting nearly three years (956 days) since their last test the anthems were an emotional even in themselves, with Australia also fielding 11 debutants.”

One of Fiji’s Achilles heels has been discipline, and - fired up after at the start - this problem hurt them almost immediately when fullback Roela Radiniyavuni was yellow carded, after just three minutes, for a deliberate knock-on. She batted down an in-field pass from Australian winger Ivania Wong, who had found some space and had a support positioned to dash over.

The action also resulted in the awarding of penalty try, but that Fiji soon wiped the advantage off with the first of what would be two close-range tries from powerful Fijian hooker Vika Matarugu.

The home side regained the lead at 12-7 with a determined try in the corner to winger Mahalia Murphy after crisp distribution inside through centre Pauline Piliae. Murphy still had work to do but a little in-and-away beat one defender and she dotted down with another defender latched on.

Player-of-the-match Piliae was a standout and she speared over for a try midway through the first half set up by a pass from flyhalf Arabella McKenzie.

The Fijiana narrowed the score to 26-14 lead just before ethe break when experienced prop Liz Patu produced one of her pick-and-go specials with a spin move for a try.

Fiji threatened early in the second half and closed the scores to 26-19 with a sharp try to centre Talei Wilson before Aussie backrowers Grace Hamilton and Shannon Parry combined to force a relieving penalty at the tackle as well shortly after. Captain Parry made a key call just after the hour mark by waving away a simple three points from a penalty shot. Instead, she pressured with a kick to touch which turned into a perfectly worked driving maul.

Replacement hooker Ashley Marsters powered over for the try, having already made her mark with several strong carries and tackles.

Fiji’s threat was largely spent into the final quarter – they scored most of their Super W points in the opening 40m - but they defended well and stopped Australia from extending their lead until Parry in front was able to score the final try, set up by centre Georgie Friedrichs’ slicing run. She popped a hopeful ball from which Parry used all of her sevens skills to get the final score.

Earlier in the day Japan had beaten a young “Australian Barbarians XV” at Wests Rugby Club in Canberra.

The Sakura Fifteen outclassed the make-shift side in the four-tries-to-two win, proving ideal preparation for Tuesday’s clash with the Wallaroos.

Flanker Kyoko Hosokawa opened the scoring for the Japanese, taking the defensive line on from the ruck as she broke three tackles to score.

Whilst the Barbarians struggled for continuity, it was their scrum keeping them in the contest as they bullied their opposition in the first half.

Brumbies duo Grace Kemp and Lilyann Mason-Spice did their Wallaroos chances no harm as they tried to will them back into the contest, stopped by some great scrambling defence.

Japan number eight Mateitoga Bogidraumainadave gifted them a 12-0 lead at the break, proving unstoppable from the 5 metre scrum as she crashed over.

Needing a response after the break, it was her opposite number Kemp that sparked the Barbarians into action.

The Brumby bulldozed her way through half a dozen defenders before being brought down just before the line, with Waratahs standout Tatum Bird darting over from the next phase.

The tireless workrate from loosehead prop Hinata Komaki was rewarded for Japan, picking and going on three straight occasions, with the final effort catching the defenders off guard as she went over untouched to restore the lead.

Fullback Mason-Spice used the penalty advantage to great use four minutes later, producing a near-perfect cross-field kick, forcing a mistake as Melanie Wilks touched down to reduce the margin to seven with 20 minutes to go.

With the game on the line, captain Misaki Suzaki stepped up when needed, charging over the line to secure the victory.

It gives Japan their second win in a week after they held off Fijiana, looking to continue their strong form against the Wallaroos on Tuesday