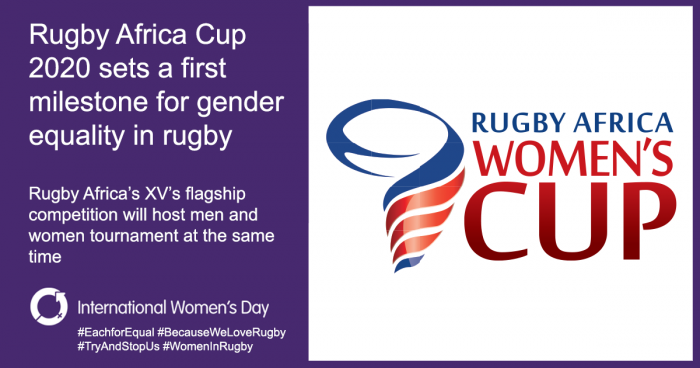 Whenever possible, the women’s matches in the 2020 Gold Cup will be played as part of double headers, normally before the men’s matches, and at the same venues.

However, the tournament remains an invitation-only event with the same four teams taking part as played in 2019, despite several other active test teams in Africa, some of whom are ranked higher than some of the teams who have been selected. We asked Rugy Afrique why this wa sthe case and they said that "for 2020, it was decided to reconduct the same four teams for consolidation as there is no qualification pathway into the Rugby Africa Cup - as yet.  However, Rugby Africa had proposed an extended format to 6 teams and consulted with the targeted unions. Due to the financial input this would have required from the unions this was not feasible at this stage.

"Rugby Africa’s goal is to grow the women’s game. The first step will be to agree on a qualification pathway for new teams to qualify into the Rugby Africa Cup as is, and most likely there will have to be a promotion / relegation system in place.  In a second step, we will need to find additional sources of income to make it viable to expand the competition indeed."

President of Rugby Afrique Khaled Babbou said:, “This is a logical step to implement our vision for a gender equal sport. We are dedicated to take leadership in women’s rugby and look forward to developing grass root sports as well as the flagship competitions towards a gender equal game. In a next step we need to look at creating tournaments in the various regions to organically develop and grow team participation. Women in rugby is one of our key strategic priorities and in the week leading to the International Woman’s Day we have celebrated achievements of women in African Rugby to put the enormous potential we have in the spotlight”.

World Rugby Women’s General Manager, Katie Sadleir said: “Rugby Africa is at the forefront in accelerating the development of women in rugby within its region. Since the launch of the global strategy for development of women’s rugby, we have seen transformational change on and off the field of play worldwide. Women’s rugby continues to grow with more than 2.7 million women and girls playing rugby at all levels, accounting for more than a quarter of players globally.”

“Rugby Africa play a key role in the continued success for developing women in rugby. Off the field the board of Rugby Africa has made fundamental changes which show its commitment in providing equal opportunities for women in rugby.  On the field, by aligning the Rugby Africa Cup to host men’s and women’s matches at the same time this will have a positive impact in raising the profile of the women’s 15s game in Africa.”

The first Rugby Africa Women’s Cup took place last year with all matches taking place in South Africa. The Springbok won the competition and qualified for the Rugby World Cup 2021 as a result, with Kenya finishing as runners-up and with a chance of a place in the world repechage, if they can beat Colombia, the champions of South America.

Fixture dates (with venues, if known) for the tournament are:

30 May: Kenya vs Madagascar; South Africa vs Uganda (Pretoria)