5-try Swiss back to winning ways

Switzerland recorded their first test win for a year, and their biggest ever tournament performance, with a 32-0 European Trophy victory in Yverdon. 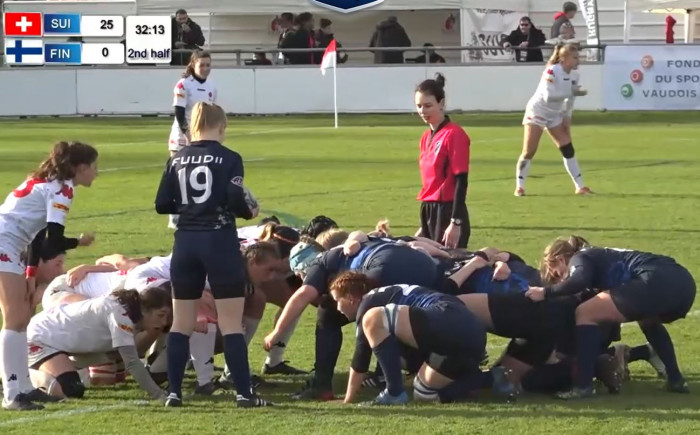 Switzerland moved into second place in the European Trophy with a comprehensive 32-0 win against Finland, who will take the wooden spoon in this season’s tournament.

Finland kicked off, but that was very nearly the last time they touched the ball before Anne Thiebaud went over in the corner for Switzerland after 5 minutes, Emily Marclay’s offload setting her up for a try that put the Swiss on the board.

The next 20 minutes were more even, but Swiss forward power win them a second try on 27 minutes after battling down down to the Finnish line, and after a series of pick goes before was prop Maria Sorlirico spotted the gap.

The Finns held on for the rest of the half despite most of the play being at their end.

The Swiss began the second half as they had ended the first, and a great break by Rahel Bosshard nearly set up a third try almost straight from the start, the Swiss knocking on when over the line.  However, power of the Swiss pack turned the following scrum over, allowing Julie Gaudin to score their third try.

The Swiss were thoroughly on top now, but the Finns held them at bay. Louise Kuss added a penaty just before the hour.

With 10 minutes to go another solid Swiss scrum set up Bosshard to score under the posts. Then in the final minute Julie Gaudin broke away from the back of a well-controlled Swiss maul for a fifth try for the home team, which with Kuss’s conversion ended the game with a 32-0 for Switzerland.

The bonus-point win puts the Swiss second in the European Trophy table, with just their visit to Sweden (who lie one point behind) next year to go. A win in Sweden could put the Swiss on level points with the Czechs who lie at the top of the table, but Czechia would still win the Trophy due to their win over Switzerland last week.