The first full-time Wales Women players have been contracted by the Welsh Rugby Union. 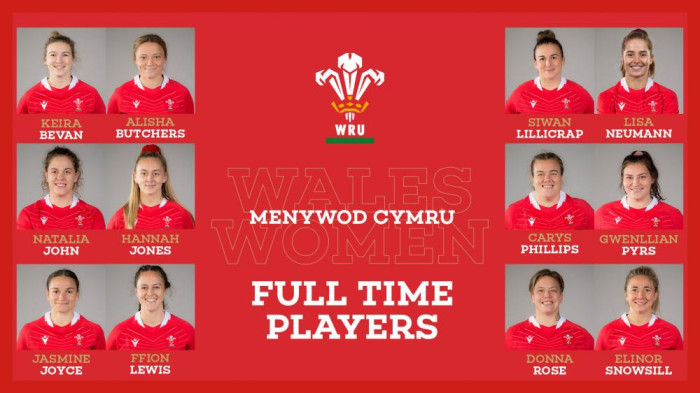 Twelve women's players have accepted full-time contracts with the Welsh Rugby Union for the first time.

The 12-month contracts came into force this week with players and management based at the National Centre of Excellence.

The 12 contracts - two more than originally announced, will be complemented by 15 retainer contracts or semi-pro deals.  There was some criticism after the initial announcement when it was reported that the full-time contracts are worth around just £19,000, while the retainers are worth around £7,500 making it highly likely those commiting to fulltime deals are doing so at a personal loss compared to their current jobs.

There will also be match fees for matchday 23 squad players for the first time and, and World Cup selection and training camp attendance payments.

New Zealand yesterday announced fulltime deals for around 30 players, with final payments between the £30 and £60k mark though it is undertstood that the top end of the band comes with a range of conditions and that some players did turn down deals which compared unfavourably with their current salaries.

Group Chief Executive Steve Phillips said, “This is a very proud day for us as a governing body. I am very pleased to be able to say we have our first full-time female players who will represent Wales on the international stage. This is set to be a very demanding but unforgettable year for women’s rugby and these players – along with the players on retainer contracts and other squad members – will benefit from the full range of our expert on and off-field support to help them reach their potential. This is the start of an exciting journey for women and girls in Wales.”

WRU Performance Director Nigel Walker said, “The historic awarding of 12 full-time contracts will enable all these players to be full-time professionals and have regular, weekly contact with head coach Ioan Cunningham, the rest of the coaches and our expert science and medical team. All of this will make a significant difference to the players’ preparation, fitness and skill sets in order to enable us to challenge the best teams in the world.

“We were so pleased with the quality of the players’ autumn performances that an increase to 12 full-time contracts was agreed, and the coaching team felt that working with 12 players who form the spine of the team would make a big impact. These players will be joined by 15 players on retainer contracts in the coming weeks."

Wales Women head coach Ioan Cunningham said, “It’s been a tough but enjoyable process. Credit to all the players who have given us selection headaches. We are all now super excited to get the programme started.
“Talent and ability was the first element in our selection process and then the potential growth of the individual player along with their attitude.

“The conversations offering contracts were nice ones to have if often quite emotional. Some of the players had logistic issues to work through from a personal and professional perspective but it’s great to have them at the National Centre of Excellence now as we start to put the foundations in place for improvement. We have developed close working relationships with the players’ Allianz Premier 15s clubs and I’m confident our programme will prove beneficial for all parties.”