12 teams to compete for spot in World Series

World Rugby have announced the 12 teams who will compete for a place in next season’s World Series, replacing Brazil who were relegated. 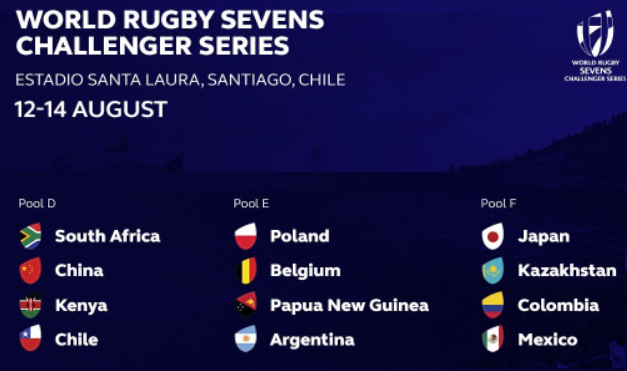 Twelve teams have been selected by World Rugby to compete in in a “Challenger” tournament in Santiago, Chile between 12th and 14th August to decide who will be promoted to the World Series.

The teams selected are:

It is unclear exactly how the teams have been selected.

Relegated Brazil are not being give a chance to win back their place until next year.

Chile obviously gain a place as hosts, along with Colombia and Argentina who were second and third in June’s South American Sevens, but that is unfortunate for Paraguay who finished above Chile.

Papua New Guinea also make the cut from Oceania based on the last full regional sevens back in 2018.

While it is likely that Scotland and Hong Kong chose not to take part (Scotland in particular have said that they were prioritising the 15s World Cup, and Hong Kong continue to have COVID problems), the selection of Kenya is particularly odd as they were only fifth in April’s African Sevens, behind winners South Africa, Madagascar, Tunisia and Uganda.

The twelve teams have been divided into three pools:

Poland may be happiest with the draw, while of the other leading seeds South Africa are likely to find China a challenge, and Japan will not find Kazakhstan or Colombia easy opponents.

However, even with the draw there are some strange decisions as it appears that Kazakhstan have been seeded fourth abive China (sixth). Papua New Guinea's eighth seeding also seems a little high, ahead of Argentina..

The top two from each pool along with the two best third-placed teams will qualify for the quarter-finals, before the semi-finals and final will decide the winners who gain the ultimate prize of promotion to the HSBC World Rugby Sevens Series.

Only the winners of the tournament will become a core team, which suggests that World Rugby are holding open Russia’s place. As a result each tournament is likely to feature two guest teams, so top level competition for Brazil and other teams is still likely.