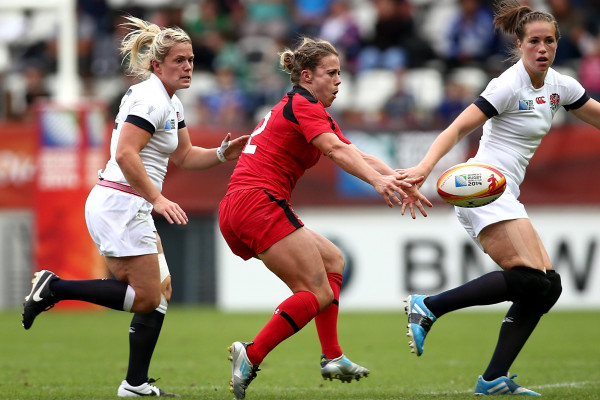 Drawing New Zealand in their pool was hardly much reward for the team who finished runners-up at the last Word Cup, and Canada will build up for their clash with the Black Ferns treating it as a de facto quarter-final.

The one mercy Francois Ratier’s side has is a chance to build up to this massive game with two matches against Hong Kong and Wales - games they will expect to win - before facing the most anticipated pool clash of the entire competition - not withstanding that the home crowds will consider that to be France v Ireland!

Ratier has spent the last three years trying to get his squad together more and building  on the experience of the core squad he took to France with such success three years ago.

As a result the squad has a familiar look to it.

In fact Ratier is taking the exact same 28 players to Ireland as he did to New Zealand in the summer, in a squad which features 18 returnees from the 2014 World Cup squad including captain Kelly Russell and 2014 world player of the year Magali Harvey.

And while Ratier has focused on building the experience of his squad, he was also boosted by the arrivals of Russell, Elissa Alarie, Karen Paquin and Harvey from the sevens programme last year.

Canada’s 7s and 15s programmes are now distinctly separate and the players who chose to play 15s and give up their shot at another round of 7s contracts, will surely add even extra spark and hunger given the sacrifices they have made.

The Canadians come into the tournament on the back of a mixed series of results over the summer - losing 28-16 to the Black Ferns and 27-20 to England before beating Australia 45-5. On paper they would rather more positives in the "W" columns, but in reality two tough but close tests against the two sides favourites to contest the World Cup Final will surely stand to them in Ireland.

Indeed the closeness of the scores against England and New Zealand are a reminder that Canada are serious title contenders once again, and as a team who tend to improve as competitions go on, Ratier will be grateful that the Kiwi clash is not the first hit out.

And this is a seriously strong Canadian side.

Up front the Russell sisters will provide important power and nous, alongside the brilliant Latoya Blackwood, who can wreak havoc in tight exchanges with her powerful running.

Karen Paquin has long been one of the best players in the world - setting consistently high standards in the back row and showcasing her searing pace at every turn and she remains absolutely vital to Canada’s fortunes. Ratier cannot afford anything other than a fully fit Paquin for the entire competition - she is that good.

In the backs, the highly rated fly-half Emily Belchos, will lead a talented line which includes the veteran Andrea Burk and the brilliant fullback Julianne Zussman.

Much focus will come on Magali Harvey out wide, who was the darling of 2014 but who hasn't been able to reach the same heights since.  Given time and space, she could thrive on the hard pitches in Ireland if the weather remains kind.

Canada’s great strengths have long been their physicality along with their desire to keep the ball in play. It makes watching their games extremely exciting, but also brings risk.

Anyone who was there will never forget Harvey’s brilliant try against France in Paris.

It is not stretching the point to say that that try, afterwards beamed around the world, was a game-changing moment for women’s rugby and showed Canada at their risk-taking best. Why kick when you can run from behind your own line in a World Cup Semi-Final?

But with defences improving markedly in the last few years, especially among the European teams, Canada will have to be more pragmatic this time and much pressure will come on Belchos to use her boot accurately so Canada can play their fast and loose game in the right parts of the field.

New Zealand will simply not give them the time and space to throw it around in their own half.

Women’s rugby in Canada is experiencing its highest ever profile, thanks in large part to the medal-winning effort of the 7s team in Rio last summer.

In a tough pool and a competition that offers zero margin for error, Canada’s 15s players will want to keep that interest and exposure going - but they will have to do it the hard way.