In the latest of our series looking back at previous Women's Rugby World Cups we look back at the 2002 World Cup in Barcelona. 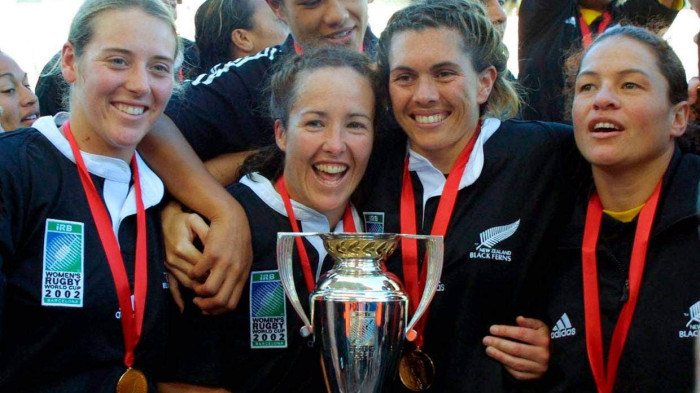 This is a part extract from the book ‘Scrum Queens – the story of women’s rugby’ - and follows our look last week at the 1998 World Cup.

Between the first ‘official’ World Cup in 1998 and the next edition in 2002 in Barcelona, the women’s game had continued to grow and build its profile.

England had embarked on an ambitious tour of Australia and New Zealand in 2001, famously beating the Black Ferns in the final test – a result that then head coach Geoff Richards described as “the high point of women’s rugby in England”

France had also finally made their mark and in the months before the World Cup had won the first full women’s Six Nations title. This French team had some of their best talent yet with Nathalie Amiel pulling the strings in the backline – a legendary player who played against Great Britain when she was just 15 years old – something allowed because the game in France was not governed by the FFR at the time and so there were no age restrictions.

The 2002 Six Nations would be her last, so it was fitting that she led her side to eventual glory. The crunch game, as ever, was the clash with England in the third round in Lyon.

France pipped it 22-17 and the path was cleared for them to take their first title and be crowned the first women’s Six Nations winners, and with a grand slam.

A mixed experience in Spain

Few players speak fondly of their experiences of the World Cup in Barcelona, away from the games at least.

The intimate feel of the previous event in Amsterdam was gone.

Players were spread out across the Barcelona area and many had to travel miles to train. Interaction between the teams was rare and although New Zealand were probably favourites again, England’s win on their home turf the year before had given the Black Ferns something of a wake-up call and forced a tactical rethink.

A panel  of  leading  New  Zealand  coaches  such  as  Wayne  Smith  and  Robbie  Deans  had  been  brought  together  to support Black Ferns coach Darryl Suasua and help the team to improve.

As  part  of  the  new  focus,  the  players  trained  alongside  the  men’s  Super-12  development  teams  and  played  games  against a handful of regional women’s teams. Captain Farah Palmer would  later  declare  the  loss  to  England  as  the  best  thing that could have happened to them and a springboard for improvement.

Once again 16 teams competed – incidentally the last time that has happened with the competition reduced to 12 since, though that will change again in 2025.

For the first time a pre-tournament qualification match took place to decide Asia’s second representative. All the rest were invited by the IRB.

There were  two key  differences  from  1998.  The lowest-ranked  European teams (Sweden and Russia) were replaced by teams from Asia (Japan) and Oceania (Samoa).

Hosts Spain were realistic about their chances with captain Mercedes Batidor telling the media beforehand:

“The World Cup is the pinnacle of a player’s career and I am sure Spain will do well in front of its own public. I think finishing between fifth and seventh in the world would be a good result for us, but it will be tough work.”

Spain opened the competition with a win, and a convincing one too, 62-0 against Japan.

The one-sided nature of some of these results would play a part in the IRB deciding to curtail the competition to 12 teams to enable other sides to build depth and make the overall event more competitive.

The quarter-finals went relatively to form, though England stuttered against Spain, trailing at half-time before going on to win unconvincingly 13-5.

The competition was set up for a grandstand finish with New Zealand taking on France and England taking on Canada for a place in the final.

The Black Ferns were efficient in their match, winning with ease,  30-0  in  the  end.  Tammi  Wilson  scored  13  points  at full-back, with Melodie Robinson scoring early too.

With New Zealand down to 14 players for 20 minutes of the second half after back-to-back sin bins for Adrianne Lilii and Amiria Marsh, the stalemate continued, but when they returned, so did New Zealand’s form.

Dianne Kahura came off the bench to touch down and prop Rebecca Luia’ana put the seal on the win in injury time.

England, meanwhile, made up for their frustrating game against Spain with a huge 53-10 win over Canada in searing heat, finally showing the form that had pitted them as genuine World Cup contenders with a powerful performance in Girona. Sue Day had a hat-trick and England were far too good overall.

Gill Burns was still involved with England and having a huge impact, though the veteran of four World Cups would surprisingly not make the starting line-up for the final.

On the day of the final games, France won bronze, piling on the agony for Canada and winning 41-7.

France were in part motivated by the fact the game would be the last for stalwart Amiel, who played brilliantly, scoring two tries. Estelle Sartini also had a fine tournament off the tee and France could be relatively satisfied with their third-place finish – a position though they have failed to better since.

The final itself was watched by a crowd of around 8,000, though it felt less given the capacity at Barcelona’s Olympic Stadium was over 55,000.

It was once again to be New Zealand’s day, this time with a narrower result, 19-9.

The victors played a more conservative style, having perhaps learned lessons from England’s win the year before. Shelley Rae’s kicking kept England in contention throughout a tight first half, but New Zealand eventually eased clear with tries from Monique Hirovanaa and Cheryl Waaka.

Rae cancelled out two Tammi Wilson penalties with one of her own plus her first drop goal of the tournament before adding a  second  penalty  to  edge  England  9-6  ahead.  But Hirovanaa put New Zealand back in front and Waaka extended their advantage to seven points.

The Black Ferns managed to hold on for the rest of the second half despite the sin-binning of Victoria Heighway. Hannah Myers, a replacement, sealed the win with a penalty in injury time.

Alison  Kervin,  a  pioneering  female  rugby  journalist,  covered the game for the UK press at the time reporting that the Kiwis deserved their win:

“New Zealand were the better side on Saturday; they were superior in the forwards and awesome in defence, as they had been throughout the tournament. They have not conceded a try and have had just 12 points scored against them.”

“At the end of the tournament, as the New Zealand team performed the haka to celebrate their victory and We Are The Champions resonated around the stadium, the England team clutched their silver medals to their chests and hugged one another.

“To come so close to victory, and to lose in the final game, is a devastating blow, but to make it to a World Cup Final in the first place is a magnificent achievement. That England have made it to every women’s World Cup Final says much about the dedication and commitment of those behind the game in this country.”

Charmaine Smith ran in a brace of first-half tries as the Wallaroos built a 13-0 half-time lead, with further touchdowns after the break from centre Sharon O’Kane and f lanker Selena Worsley.

The rest of Australia’s points came via the boot of Tui Ormsby.

Afterwards, players would reflect on the venue and the decision to host the World Cup in Barcelona, a fantastic city but hardly one known as a rugby hotbed.

“It was difficult. We were in the middle of nowhere in this little resort town. Our training ground was so far away it took the day to get out there and get back. We’d meet, bus for miles, train and have lunch, then come back and it was the whole day so the experience was just about having a really long day. The games would be one to two hours away and we were playing in different venues which didn’t feel like it really worked. We didn’t see any of the other teams apart from playing them. I can’t say I enjoyed the 2002 World Cup at all, apart from winning the thing.”